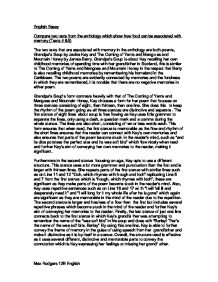 Grandpas Soup by Jackie Kay and The Coming of Yams and Mangoes and Mountain Honey by James Berry. Compare two texts from the anthology which show how food can be associated with memory

English Essay Compare two texts from the anthology which show how food can be associated with memory (Texts 4 &5) The two texts that are associated with memory in the anthology are both poems, Grandpa's Soup by Jackie Kay and The Coming of Yams and Mangoes and Mountain Honey by James Berry. Grandpa's Soup is about Kay recalling her own childhood memories of spending time with her grandfather in Scotland, this is similar to The Coming of Yams and Mangoes and Mountain Honey in the respect that Berry is also recalling childhood memories by remembering his homeland in the Caribbean. The two poems are evidently connected by memories and the fondness in which they are remembered, it is notable that there are no negative memories in either poem. Grandpa's Soup's form contrasts heavily with that of The Coming of Yams and Mangoes and Mountain Honey, Kay chooses a form for her poem that focuses on three stanzas consisting of eight, then thirteen, then one line. She does this to keep the rhythm of the poem going as all three stanzas are distinctive and separate. The first stanza of eight lines about soup is free flowing as Kay uses little grammar to separate the lines, only using a dash, a question mark and a comma during the whole stanza. ...read more.

There is however some similarity between the two, throughout his poem, Berry uses little grammar in his stanzas which is similar to Kay's first stanza in Grandpa's Soup. The aim of this is to keep the poem flowing and the technique of using an asyndetic list makes this effective, an example being "Breadfruit a green football, congo-peas like tawny pearls, mango soaked in sunrise". By doing this, Berry keeps the form of his poem flowing and ensuring that it is memorable to read. It is also notable that Berry opts to start a new stanza each time the poem moves to a new topic. For example, in the first stanza he is dwelling on the dullness of London and how it is different to the Caribbean and as soon as he switches onto remembering the scenery and food of home, he starts a new stanza. Berry's form & structure is a lot less complicated than Kay's, revolving around the short, separate stanzas that are easy to read and have a flow that is quick and memorable for the reader. The purpose of both poems is to convey the theme of memory through food which both do effectively, using separate memories, with Kay doing it through her grandfather's soup and Berry through the food from his Caribbean homeland. ...read more.

Metaphors are also used to convey this imagery such as "Coconuts are big brown O's", "colours of sun stalled in groups" and "melons too smooth to be pineapples". Furthermore, Berry uses a lot of personification when describing the food such as "sun drew stripes on fish" and "mints and onions quarrel" to give the food human characteristics that the reader can relate to. Berry's use of word classes is the most important part of evoking vivid imagery which is especially important in this poem as Caribbean food has many contrasting colours and tastes which is important for Berry to distinguish, especially for his audience. He uses nouns such as "London", "Caribbean" and "market" to give distinction between the various settings in the poem. He also opts to use adjectives such as "brightness", "fleshy", "tawny" and "squinting" to give description of the various Caribbean foods and make them bright, vivid and memorable for the reader. Finally, his use of verbs such as "cooing" and "drops" gives some personal element to the poem and makes the reader feel as if they are actually with Berry in the Caribbean which is an effective use of word classes to evoke this from the reader. ?? ?? ?? ?? Max Rodgers 12B English ...read more.