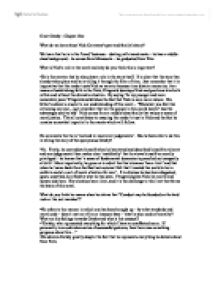 Great Gatsby - Chapter One What do we learn about Nick Carraway's past and family history? We learn that he is in the 'bond' business - dealing with investments - he has a middle-class background - he comes from Minnesota - he graduated from Yale What is Nick's role in the novel and why do you think this is important? � He is the narrator but he also plays a role in the story itself. It is clear that the story has already taken place and he is telling it through the filter of time. Just remember that it is imperative that the reader trusts Nick as narrator because time distorts memories. As a means of establishing faith in the Nick, Fitzgerald develops Nick and positions him both within and without the dramatic situation. By saying 'In my younger and more vulnerable years' Fitzgerald establishes the fact that Nick is now more mature. His father's advice is crucial to our understanding of this novel - 'Whenever you feel like critisizing any one...just remember that tall the people ...read more.

Fitzgerald gives Nick his mortal and human side here. His tolerance has a limit, and it is the challenge to this limit that forms the basis of this novel. What do you think he means when he claims that "Conduct may be founded on the hard rock or the wet marshes"? � He refers to the manner in which one has been brought up - by what standards and moral code - does it rest on a firm or insecure base - what is your code of morality? What are his feelings towards Gatsby and why is this unusual? � "Gatsby, who represented everything for which I have an unaffected scorn. If personality is an unbroken series of successful gestures, then there was something gorgeous about him..." � He admires Gatsby greatly despite the fact that he represents everything he detests about New York. � He found his personality irresistible, magnificent, larger than life, charismatic. Setting is highly important in 'The Great Gatsby'. ...read more.

to show off - ostentacious � They had been in France and 'drifted' to New York 'unrestfully' What is significant about "two old friends whom I scarcely knew at all"? � This underlines the nature of the society described in the novel in an ever-present ironic tone - you do not call someone a friend if you do not know them - none of Gatsby's friends stick with him in the end. What are your first impressions of Tom Buchanan? � "hard mouth and a supercilious manner" - he is arrogant and superior � "two shining arrogant eyes" - untrusting, suspicious � "aggressively" - intimidating � "great pack of muscle shifting" - sheer power, violent tendencies? � "a cruel body" - capable of great harm � "impression of fractiousness" - irascible, could easily snap � "there was a touch of paternal contempt in it" - again authoritative air/scorn for those he regards as inferior � "there were men...who hated his guts" � Invokes strong emotion from people Look at the description of the room in the Buchanan house. ...read more.