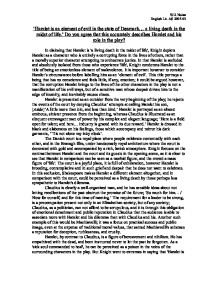 'Hamlet is an element of evil in the state of Denmark... a living death in the midst of life

'Hamlet is an element of evil in the state of Denmark... a living death in the midst of life.' Do you agree that this accurately describes Hamlet and his role in the play? In claiming that Hamlet is 'a living death in the midst of life', Knight depicts Hamlet as a character who is entirely a corrupting force in the lives of others, rather than a morally superior character attempting to orchestrate justice. In that Hamlet is secluded and absolutely isolated from those who experience 'life', Knight condemns Hamlet to the title of being an emotionless element of malevolence. It is important however to consider Hamlet's circumstance before labelling him as an 'element of evil'. This title portrays a being that has no conscience and feels little, if any, emotion; it could be argued however, that the corruption Hamlet brings to the lives of the other characters in the play is not a manifestation of his evil ways, but of a sensitive man whose despair drives him to the edge of insanity, and inevitably causes chaos. Hamlet is presented as an outsider from the very beginning of the play; he rejects the events of the court by denying Claudius' attempts at calling Hamlet his son, [Aside]'A little more than kin, and less than kind.' Hamlet is portrayed as an almost ominous, sinister presence from the beginning, whereas Claudius is illustrated as an eloquent extravagant man of power by his complex and elegant language; 'Here is a field open for talent; and here... ...read more.

Hamlet's desperation is depicted by his frantic attempts to be seen as insane, it is my opinion that if he is able to convince the audience that he is without morality or emotion, it only further convinces me that Hamlet is willing to risk and make full use of all that he has. His most valuable asset, his mental health, is presented as something Hamlet hides in order to fulfil his father's wishes. These desperate actions are not those of an evil element, but of a frantic young man who seeks closure in the murder of his father. As the play unfolds and more traits of Hamlet's character are revealed, he continues his vengeful quest accompanied by his progressively convincing insanity. Soon after confessing his love for Ophelia, Hamlet quickly withdraws and denies any love for her in disgust, 'I loved you / not'. In doing this he shows both sides of his questionable motives and morals, and presents his tendency to act impulsively. Hamlet displays these traits in his interactions with his frail and dependent mother; as he reminds her of the sins that she has committed, a sound is heard, and Hamlet lashes out rashly with his sword. With all intentions of slaying someone, he acts, regardless of who stood behind the tapestry. This deed alone seems uncharacteristic and impulsive in nature, but is soon followed by others of similar severity. ...read more.

Despite Hamlet's rash and desperate actions, and his cruelty to Ophelia and Gertrude, we do engage with Hamlet on various levels, his grappling with his task of revenge is something everyone can relate to. Doubt in the ghost's trustworthiness, leading him and Shakespeare to reflect on the purpose and meaning of life itself, shows that through dramatic devices, principally soliloquy, we tend to sympathise with Hamlet. All of the confusion over Hamlet's true nature and the ambiguity of his character is the result of Shakespeare's ingenious manipulation of his characters to implicitly articulate his ideas. In saying 'Hamlet is an element of evil', Knight jumps to conclusions, condemning Hamlet's character to the rigid label of evil, when in fact the opposite is true. The possible perception that Hamlet is evil is merely a manifestation of confusion, emotion and desperation, these being traits that an element of evil could not possibly possess. Shakespeare uses Hamlet's ambiguous nature as a way of raising philosophical questions about human nature. Almost every kind, noble, or gentle act Hamlet commits is coupled with one lacking morality. Given this however, this is merely an analysis on a human life, and a series of events based on the elements of confusion and depression; to call Hamlet a corrupting force may be a little more accurate, however I believe to call Hamlet an 'element of evil' is a generalisation of an ingeniously intricate character designed to make the audience think about Hamlet's true nature, not to brand him as a 'living death'. ?? ?? ?? ?? Will Nolan English Lit. AS 2005-03 ...read more.