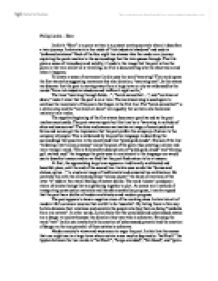 Phillip Larkin - Here Larkin's "Here" is a poem written in a present continuous style where it describes a train journey. Larkin starts in the midst of "rich industrial shadows" and ends in "unfenced existence" Each of the four eight line stanzas take the reader on a journey exploring the poets reaction to the surroundings that the train passes through. The title gives a sense of immediacy and validity, it lends to the image that the poet writes the poem in the train whilst he is travelling, as if he is documenting what he observes as and when it happens. To create a sense of movement Larkin uses the word "swerving" This word opens the first stanza by suggesting movement but also direction, "swerving east", In this stanza we discover that the poet is moving away from a large town or city as evidenced by the words "from rich industrial shadows and traffic all night north.;" The lines "swerving through fields...", "harsh-named halt...", and "workmen at dawn;" make it clear that the poet is on a train. ...read more.

At first, the approaching large town appears a traditionally architected and beautiful place, until the end of the second line. Larkin uses words like "domes and statues, spires..." to create an image of traditionalist and conservative architecture. He contrasts this with the alliterated phrase "cranes cluster" the harsh alliterations of the letter "c" adds to the overall feeling of instant dislike. The word 'cluster' produces a vision of sinister beings that are gathering together to plot. As cranes are a method of transporting construction materials and therefore symbolise progress, it can be argued that the poet has a dislike of modern architecture and modern progress. The poet appears to have a negative view of the working class. Larkin lists all of modern life's common luxuries that are felt to be 'essential'. By listing them in this way Larkin demeans their existence and convicts the people who buy them as being "residents from raw estates". In other words, Larkin feels that the unmolded and unharnessed estates are a danger to society because the direction they may take is unknown. ...read more.

Here the poet expresses his concern that villages are being abandoned in favour of the "mortgaged half-built edges..." He notes in stanza four that it is this abandoned countryside where "leaves unnoticed thicken, hidden weed flower" We can tell that the mood is sadness at the start of the last stanza because it's first word is "loneliness" We know from the biography of Larkin that he didn't enjoy the company of people much and thus must have been quite lonely to any other person observing his life. Larkin challenges this perception to a more positive one as he explains the reasons for his escape to the untouched nature at the seaside. As the poet reaches the coast the mood changes to a positive one. The language the poet uses changes to more positive words; "unfenced existence: facing the sun, untalkative, out of reach." Larkin challenges the human need to socialise by presenting a quiet and tranquil environment. He presents this beach as an escape from the nature of society. It is clear that the poet treasures the company of nature and finds little to celebrate in society and its ways. ...read more.