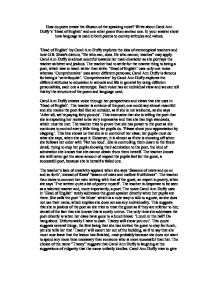 How do poets create the illusion of the speaking voice? Write about Carol Ann Duffy's 'Head of English' and one other poem from section one. In your answer show how language is used in both poems to convey attitudes and values.

How do poets create the illusion of the speaking voice? Write about Carol Ann Duffy's 'Head of English' and one other poem from section one. In your answer show how language is used in both poems to convey attitudes and values. 'Head of English' by Carol Ann Duffy explores the idea of stereotypical teachers and how G.B. Shaw's dictum, "He who can, does. He who cannot, teaches" may apply. Carol Ann Duffy is almost scornful towards her main character as she portrays the teacher as bitter and jealous. The teacher had to settle for the nearest thing to being a poet, which was to teach rather than write. 'Head of English' uses only one voice whereas 'Comprehensive' uses seven different personas; Carol Ann Duffy is famous for being a 'ventriloquist'. 'Comprehensive' by Carol Ann Duffy explores the different attitudes to education in schools and life in general by using different personalities, each one a stereotype. Each voice has an individual view and we can tell this by the structure of the poem and language used. Carol Ann Duffy creates voice through her perspectives and views that she uses in 'Head of English'. The teacher is envious of the poet, one could say almost resentful and she makes the poet feel like an outsider, as if she is not welcome, as she says 'After all, we're paying forty pounds'. ...read more.

The first speaker is an African female and we know this because she talks about Africa and how she has games which are similar to 'hopscotch', which is known to be played mainly by small girls. We can tell that the transition from Africa to England was difficult for this girl as she says how she likes 'Africa better than England'. She reminisces with her mother about their life in Africa, she finds this a good way of dealing with the life she has now in England. The language used by speaker one is broken, it is very plain and blunt which may suggest that they have not been living in England long. Wayne is an English, lower class, teenage male who is extremely r****t and sees no future for himself. We know he is r****t as he talks about 'paki-bashing' which means that he does not like Asian people, who are mentioned again in his stanza when he says 'I don't suppose I'll get a job. It's all them coming over here to work'. He almost blames Asian people for taking his job away, when in-fact it is clear that he will not have a job due to his laziness and clear ignorance. The language used by Wayne makes it obvious that he has not had a good education as he has a very limited vocabulary. ...read more.

The poem is supposed to be more of a conversation, where each child gives his or her view on certain things in their life. This suits the monotonous lives of the seven characters. Not one of them seems to fully enjoy life, as they all seem to complain that it is 'boring'. Each personality is set out in a different stanza, so as to separate them so the reader can differentiate between the characters. The structure of 'Head of English' is set out in five stanzas. Carol Ann Duffy uses enjambement so that the poem is read without a rhythm, but as a block of text. There is only one voice speaking throughout the poem. With each stanza, more time goes past as the beginning of the poem is the start of the class and the end is lunchtime, where the guest poet is told to leave. The short sentences emphasize the anger or resentfulness that the teacher feels towards to guest. As the poem ends, sentences become shorter, as if she is hurrying the end of the time she must spend with the poet. Carol Ann Duffy uses the intentions and language of the speakers and the structure of the poem to create the illusion of the speaking voice. 'Comprehensive' was a good poem to compare with 'Head of English' because they are both by Carol Ann Duffy, which makes it especially interesting to compare her characters. ...read more.

This is a good essay. Topic sentences are needed at the beginning of each new paragraph to focus on the attitudes and values shown by the speakers. In places more quotes are needed to support statements. More comparison needed between the two poems.