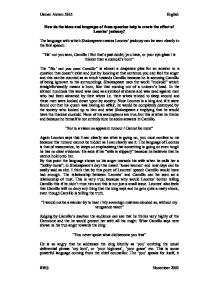 How do the ideas and languages of these speeches help to create the effect of Leontes' jealousy?

How do the ideas and languages of these speeches help to create the effect of Leontes' jealousy? The language with which Shakespeare creates Leontes' jealousy can be seen clearly in the first speech: "Ha' not you seen, Camillo / But that's past doubt; you have, or your eye-glass / is thicker than a cuckold's horn" The "Ha' not you seen Camillo" is almost a desperate plea for an answer to a question that doesn't exist and just by looking at that sentence you can feel the anger and this can be counted as an insult towards Camillo because he is accusing Camillo of being ignorant to his surroundings. Shakespeare uses the world "cuckold" which straightforwardly means a horn, like that coming out of a unicorn's head. In the sixteen hundreds this word was used as a symbol of shame and was used against men who had been ashamed by their wives i.e. ...read more.

I think that by this point of Leontes' speech Camillo would have had enough. The relationship between Leontes' and Camillo can be seen as a relationship of trust. This is very true; because why would Leontes' bother telling Camillo this if he didn't trust him and this is not just a small issue. Leontes' also feels that Camillo will no deny any thing that the king says and he gets quite a nasty shock, even though Camillo is telling the truth. "I would not be a stander-by to hear / My sovereign mistress clouded so, without my vengeance taken" Judging by Camillo's reaction the audience can see that he thinks very highly of the Hermione and the he would protect her with all his might. What Camillo says next shows us his true anger towards the king: "You never spoke what did become you less" He is so angry that he addresses the king bluntly as 'you' omitting the usual deferential phrase 'my lord', or 'your highness', 'your grace' etc. ...read more.

This is just Leontes' jealousy speaking, it has clouded his judgement. "Is whispering nothing? / Is leaning cheek to cheek? Is meeting noses? / Kissing with inside? Leontes is misreading the situation, but to his mind all this seems to be flirtatious; this is just mere reassurance. Camillo is not just angry at Leontes, but also very worried for him and his kingdom. This shows the true friend in Camillo, even though Leontes is so convinced - Camillo is still trying to make him see the light: "Good my lord, be cur'd / Of this diseas'd opinion, and betimes; / For 'tis most dangerous" Camillo is right to call Leontes' jealousy a disease. The language would allow the audience to understand that this disease of jealousy has taken over Leontes' mind and body and because Camillo has seen him already misjudging his wife and best friend; what about the Kingdom? If this disease continues to reign over him then Sicilia will be in for a very rough time. Usman Akram 5365 English RWS November 2002 ...read more.