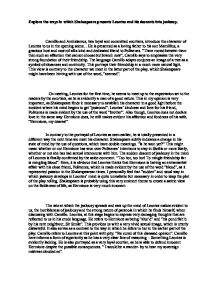 Explore the ways in which Shakespeare presents Leontes and his turn into jealousy.

Explore the ways in which Shakespeare presents Leontes and his descents into jealousy. Camillo and Archidamus, two loyal and committed courtiers, introduce the character of Leontes to us in the opening scene. . He is presented as a loving father to his son Mamillius, a gracious host and most of all a kind and dedicated friend to Polixenes. "There rooted betwixt them then such an affection that cannot choose but branch now", Camillo says to emphasize the very strong foundation of their friendship. The language Camillo adapts conjures an image of a tree as a symbol of closeness and continuity. This portrays their friendship in a much more natural light. This view is contrary to the character we meet in the latter part of the play, which Shakespeare might have been hinting with use of the word, "seemed". On meeting, Leontes for the first time, he seems to meet up to the expectation set to the readers by the courtiers, as he is evidently a man of a good nature. ...read more.

"Too hot, too hot! To mingle friendship far is mingling blood". Here, it is obvious that Leontes thinks that Hermione is having an extramarital affair with his close friend, Polixenes, which is made evident by the use of the word "blood", as it represented passion in the Shakespearean times. I personally feel that "sudden" and usual way in which jealousy develops in Leontes' mind is quite unrealistic but necessary in order to keep the plot of the play rolling. Shakespeare is probably using this very eminent theme to create a satiric view on the fickleness of life, as Hermione is very much innocent. The rate at which the jealousy spreads and eats up the mind of Leontes makes evident to us, the horribleness of jealousy and the strong nature of paranoia in which he finds himself, when discussing with Camillo. Leontes, at this stage begins to express very damaging thoughts that are reflected to us in his crude language. He refers to Hermione as being "sluc'd" and "his pond fish'd by his next neighbour, Sir Smile". ...read more.

Most importantly, the relationship between Leontes and his wife is dramatically changed after the descent of his sudden jealousy. Unlike the love filled atmosphere created by the affectionate relationship between them, Leontes refers to his wife with great hostility and to the disgust of the audience, disrespect. "My wife is slippery', he says when describing his wife to Camillo. Leontes' language, regarding his wife, is often disintegrated and difficult, which express a sense of confusion. 'Have you not seen?" "or heard?" The use of questions reflects his disordered thoughts. Hermione, on the other hand, due to her ignorance of the situation, continuous to act with affection and love through out the first Act. " I love thee not a jar of the clock behind". Here, the comparism of her love to a clock emphasizes the efficiency and dedication she has to Leontes. Finally, Leontes changes his perspective on Polixenes as well, after his psychological illness becomes of him. ...read more.