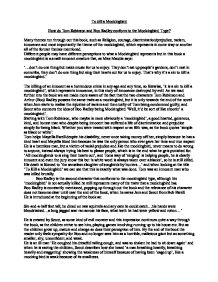 How do Tom Robinson and Boo Radley conform to the Mockingbird Type?

To kill a Mockingbird How do Tom Robinson and Boo Radley conform to the Mockingbird Type? Many themes run through out this book, such as Religion, courage, discrimination/prejudice, r****m, innocence and most importantly the theme of the mockingbird, which represents in some way or another all of the former themes mentioned. Different people may have different perceptions to what a Mockingbird represents but in this book a mockingbird is a small innocent creature that, as Miss Maudie says: '...don't do one thing but make music for us to enjoy. They don't eat up people's gardens, don't nest in corncribs, they don't do one thing but sing their hearts out for us to enjoy. That's why it's a sin to kill a mockingbird.' The killing of an innocent as a horrendous crime in any age and any time, so likewise, 'it is a sin to kill a mockingbird', which represents innocence, in this story of innocence destroyed by evil. As we read further into the book we are made more aware of the fact that the two characters Tom Robinson and Arthur (Boo) Radley possess the same traits as a mockingbird, but it is only towards the end of the novel when Jem starts to realise the injustice of r****m and the cruelty of Tom being condemned guilty, and Scout who connects the idea of Boo Radley being Mockingbird 'Well, it'd be sort of like shootin' a mockingbird'. ...read more.

By the end of the book the reader only feels sympathy for Boo and no longer sees him as a horrible, malicious giant but as something smaller, shy, unconfident, and weak. He is an ill man 'He coughed his dreadful railing cough, and was so shaken he had to sit down again' and when he is saving the children, Scout describes how she heard 'a man breathing heavily, breathing heavily and staggering' showing the weakness of himself because of having been 'caged up', like a mocking bird is weak because of its smallness. '...his thin frame to his torn denim shirt. His face was as white as his hands...his cheeks were thin to hollowness, his mouth was wide...eyes were so colourless I thought he was blind. His hair was dead and thin' This is the first time Scout ever sees Boo and it is the moment when her perception of him as being only something she'd imagined him to be, burly and wicked, changes to seeing him as he really is, insecure and frail. This is when he is totally revealed as a mockingbird, lonely 'lonelier then Boo Radley', and weak, delicate and defenceless. He only ever stayed out of the way of people, but as Jem grows to realise it is 'because he want to'. Like a Mockingbird stays out the way, sitting up out of reach in tree, singing for the people below, so does Boo Radley, who innocently never intends to hurt anyone, but his way of singing is his small gifts to the children. ...read more.

The idea of a mocking bird, has something to do with striving to fit in, because it does not have its own songs but copies other birds, to 'fit in'. 'A solitary mocker poured out his repertoire in blissful unawareness of whose tree he sat in, plunging from the shrill kee, kee of the sunflower bird to the irascible qua-ack of a blue jay, to the sad lament of Poor Will' r****m, discrimination and prejudice, which both Tom and Boo experience together, are based along a person being 'different' in some way or another and not conforming or fitting in with normal society, and this is exactly what Tom and Boo do, and because of this, one is murdered and one suffers and life of being caged up. They are both simple creatures, comfortable lifestyles that do not evolve around the people of Maycomb. Because they are different and people do not know them for who they truly are, they are unjustly persecuted. They are misunderstood, they hold little social value, and are generally assumed guilty. The symbolism of the mockingbird reveals the prejudice and narrow-mindedness of society, their fears of things different and the crimes the committed to innocent people. Before Scout falls asleep at he end of the book the describes the story which happens to someone falsely accused of doing something he never did, exactly like Tom Robinson and Boo Radley, the two mockingbirds of the story so wrongly treated by others, but when it comes down to it, it is 'only children who weep'. ...read more.