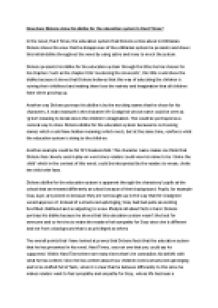 How does Dickens show his dislike for the education system in &quot;Hard Times&quot;?

﻿How does Dickens show his dislike for the education system in Hard Times? In the novel, Hard Times, the education system that Dickens writes about is Utilitarian. Dickens shows the view that he disapproves of the utilitarian system he presents and shows this initial dislike throughout the novel by using satire and irony to mock the system. Dickens presents his dislike for the education system through the titles he has chosen for his chapters. Such as the chapter title ?murdering the innocents?, this title could show the dislike because it shows that Dickens believes that this way of educating the children is ruining their childhood and making them lose the naivety and imagination that all children have when growing up. ...read more.

Another example could be Mr M?Choakumchild. This character name makes me think that Dickens has cleverly used a play on word since readers could view his name to be ?choke the child? which in the context of this novel, could be interpreted by the readers to mean, choke the child with facts. Dickens dislike for the education system is apparent through the characters/ pupils at the school that are treated differently at school because of their background. Pupils, for example Sissy Jupe, are picked on because they are not bought up in the way that Mr Gradgrind would approve of. Instead of a structured upbringing, Sissy had had quite an exciting fun-filled childhood and so adjusting to a new lifestyle all about facts is hard. ...read more.

Within Hard Times there are many times that?s he contradicts his beliefs with what he has written. Since he has written about how children need a structured upbringing and to be stuffed full of facts, when it is clear that he believes differently to this since he makes readers want to feel sympathy and empathy for Sissy, whose life has been a whirlwind of emotions and adventures and Louisa, whose life has been controlled and her mind boxed in. The main point that stands out to me that shows Dickens main dislike for the education system is the characters that he has written about within the novel and how he has presented them by the way they are treated and what he makes readers feel for them. ...read more.