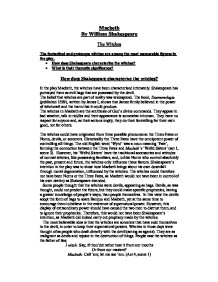 How does Shakespeare characterize the witches?

Macbeth By William Shakespeare The Witches The fantastical and grotesque witches are among the most memorable figures in the play. * How does Shakespeare characterize the witches? * What is their thematic significance? How does Shakespeare characterize the witches? In the play Macbeth, the witches have been characterised intimately. Shakespeare has portrayed them as evil hags that are possessed by the devil. The belief that witches are part of reality was widespread. The book, Daemonologie (published 1599), written by James I, shows that James firmly believed in the power of witchcraft and the harm that it could produce. The witches in Macbeth are the antithesis of God's divine commands. They appear in bad weather, talk in riddles and their appearance is somewhat inhuman. They have no respect for anyone and, as their actions imply, they do their foretelling for their own good, not for others. The witches could have originated from three possible phenomena: the Three Fates or Norns, devils, or sorcerers. Historically the Three Fates have the omnipotent power of controlling all things. The old English word 'Wyrd' was a noun meaning 'Fate', forming the connection between the Three Fates and Macbeth's 'We?rd Sisters' (act 1, scene 3). However, his 'We?rd Sisters' have the traditional accessories and attitudes of normal witches, like possessing familiars, and, unlike Norns who control absolutely the past, present and future, the witches only influence these factors. Shakespeare's intention in the play was to show how Macbeth brings about his own downfall through moral degeneration, influenced by the witches. The witches could therefore not have been Norns or the Three Fates, as Macbeth would not have been in control of his own destiny as Shakespeare intended. ...read more.

When Macbeth has arrived and is witnessing the apparitions, with every apparition there is a thunderbolt. This shows the darkness and evil of the sightings. When all the witches vanish they dance; 'Music, the witches dance, and vanish'. British witches were not known to dance so the audience will have been taken by surprise, but with this they would see the intense wickedness within the play. Witches were known for their prophecies and therefore Shakespeare made these the main objects, which direct the path of the play. The witches influence Macbeth: whilst Macbeth is in the hands of the witches the kingdom becomes increasingly more unpleasant. They performed many spells that witches were thought to cast in the 16th century; for example, they cast the 'pining' spell on a sailor; "Weary sev'n-nights, nine times nine, Shall he dwindle, peak and pine" Under the witches' influence, Macbeth seems to become evil himself. They seem to invoke the foulest spirits of darkness within him. The witches have their own purposes into which men fit and which men can serve. In the middle of the play Macbeth consults the witches, as he is afraid to acknowledge his own evil. However the witches do not make any promises: they utter riddles, which Macbeth interprets to suit his own evident interests. Macbeth more often speaks in rhyming couplets than any other character; as though he has an affinity with the witches. By the end of the play the witches have thoroughly taken Macbeth over. It is as though Macbeth is being possessed by the devil himself: he feels no pain; he only deals in evil deeds. ...read more.

The charms wound up' The witches corrupt and manipulate Macbeth's mind through hazy prophecies in order to shape history a different way. In Macbeth the witches appear to be of no gender, as Banquo questions in act 1 scene 3; '...you should be woman, Yet your beards forbid me to interpret' All other characters in the play are either male or female yet the witches seem to be both. They seem to be in the same league as Lady Macbeth, as she asks the spirits to 'unsex me here'. The witches' true identity is unclear - apart from their servitude to Hecate. Many individuals question whether Macbeth brought this fate upon himself or whether the witches did. Though the witches sought after Macbeth and told him their prophecies, Macbeth unlike Banquo toyed with these prophecies and decided that the prophecies would bring harm even before he carried them out. Macbeth carried out the deeds of murder and treachery, not forced by the witches to do so. So we must conclude that Macbeth brought on his own fate. The witches' prophecies held Macbeth's fate hidden deep inside. Their true meanings were not shown until Macbeth and his wife were deceased. His downfall was caused by his weakness for ambition and his optimism. So the witches' thematic significance in Macbeth is to control the atmosphere and the story line of the play. Their evilness affects Macbeth's actions throughout, as does their ability to create fate and corruption, and to manipulate an individuals mind. Their non-existent gender, their perverse pleasure in using their knowledge to play with the future of human beings, and their ability to twist peoples minds, together with their supernatural appearance and settings create the evil and darkness of the play. ...read more.

There are a lot of good ideas and comments in this essay, but more thought needs to be given to how to structure, streamline and organise the information.
Also more attention should be given to
achieving clarity and precision of expression.