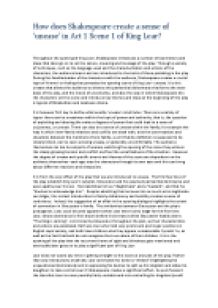 How does Shakespeare create a sense of unease in Act 1 Scene 1 of King Lear?

﻿How does Shakespeare create a sense of ?unease? in Act 1 Scene 1 of King Lear? Throughout the opening of King Lear, Shakespeare introduces a number of key themes and ideas that later go on to set the nature, meaning and message of the play. Through a variety of techniques, such as the language used and the characterization and actions of the characters, the audience learns and are introduced to the traits of those partaking in the play. During this familiarization of the characters with the audience, Shakespeare creates a crucial type of ?theme? or feeling that pervades the opening scene of King Lear- unease. It is this unease that allows the audience to witness the patriarchal disharmony that forms the main basis of the play, and the mood of uncertainty, and also the way in which Shakespeare lets the characters set the scene and introduce key themes and ideas at the beginning of the play is typical of Elizabethan and Jacobean drama. It is however first key to define what exactly ?unease? constitutes. There are a variety of types- there can be uneasiness within the topic of power and authority, that is, the question of exploiting and abusing the various degrees of power that could lead to a sense of unjustness, or unease. ...read more.

This therefore from the very start of the play brings to the audience?s attention that there is a feeling of competition within the family, and not one of total harmony. It is during the exam that real ?unease? and family conflict is born. Cordelia?s refusal to praise her father- ?Nothing my lord?- is a disruption of events that were previously becoming rhythmic following the obedience of Gonerill and Regan. Cordelia breaking the rhythm and going against the wishes of her father gives birth to the disharmony that will later dominate the novel. King Lear?s ruthless reaction, as evidenced by the violent imagery of his language, ?the barbarous Scythian?property of blood?, and declaration of losing love for his once-favourite daughter, again paints a portrait of a man hell-bent on power, his actions bordering on social insanity. Kent, a conservative and noble figure throughout the play, keeps the formality of the occasion by using words such as ?liege? and ?royal?. However he soon drops the formality of the language and almost shockingly refers to his leader as ?old man?, and refers to him saying ?thou?, a 17th century informal term that then would have caused great offence. ...read more.

One thing that Queen Elizabeth and James did do however was acknowledge God as the ?supreme ruler? of the land, and saw it as a grave sin to divide their country. So Lear?s decision to divide his kingdom up, an act of perceived instability, would have shocked, and possibly angered, Jacobean audiences, who at the time were especially worried about the future of England in this period of transition in society, and Shakespeare does very well in evoking the breakdown of that whole way of life. It is in the opening scene that Shakespeare establishes the plot (and subplot) that introduces a variety of themes- primarily patriarchal and family relations, political relations, and status and wealth. It is through the exploration of these themes that aspects such as conflict, confusion, and instability arise, the product of which is the pervading feeling of unease- the feeling that life, not only family life but also the typical English life, is not quite as harmonious as it should be, and it is in this gradual introduction and development of unease in Act I that Shakespeare sets the tone for the discordant events that will come later in the play. Thomas Smith ...read more.