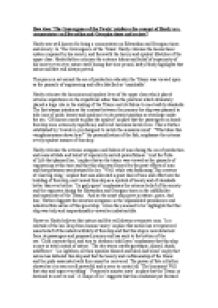 How does The Convergence of the Twain reinforce the concept of Hardy as a commentator on Edwardian and Georgian times and society?

﻿How does ?The Convergence of the Twain? reinforce the concept of Hardy as a commentator on Edwardian and Georgian times and society? Hardy was well known for being a commentator on Edwardian and Georgian times and society. In ?The Convergence of the Twain? Hardy criticises the hierarchical system imposed by his society, and therewith the luxury and opulent lifestyles of the upper class. Hardy further criticises the extreme hubris and belief of superiority of his society even over nature itself during that time period, lastly Hardy highlights that nature and fate will always prevail. This poem is set around the era of production whereby the Titanic was viewed upon as the pinnacle of engineering and often labelled as ?unsinkable?. Hardy criticises the luxurious and opulent lives of the upper class which placed extreme importance on the superficial rather than the practical which ultimately played a huge role in the sinking of the Titanic and its failure to meet safety standards. ...read more.

?Well: while was fashioning This creature of cleaving wing,? implies that man allocated a great deal of time and effort into the building of this ship, and viewed this ship as a symbol of beauty and of standards better than ever before. ?So gaily great? emphasises the extreme belief of the society and the engineers during the Edwardian and Georgian times in the infallibility and superiority of the Titanic. ?And as the smart ship grew in stature, grace, and hue,? further suggests the societies arrogance in the unparalleled prominence and indestructible nature of this great ship. ?Alien they seemed to be? highlights that this ship was truly and unquestionably viewed as indestructible. However Hardy believes that nature and fate will always overpower man. ?In a solitude of the sea Deep from human vanity? implies that nature has overpowered mans belief of the indestructibility of this ship and that this ship is now detached from its passengers and proposed journey and has sunk to the bottom of the sea. ...read more.

?No mortal eye could see? implies that the makers of this ship could not anticipate the greatness and overpowering nature of fate. ?By paths coincident? further exacerbates the power of fate and Mother Nature. ?Till the Spinner of the Years Said Now!? emphasises that fate is in complete control. Therefore the forces of fate are much stronger, and always will be than that of man; furthermore man cannot control his own destiny regardless of social standing, wealth etc. ?And consummation comes, and jars two hemispheres? implies that Hardy views death as the great leveller as no one is exempt from destiny. Therefore Hardy?s criticism of society during the era of production due to the upper classes extremely lavish lifestyle and focus on the superficial. In accompaniment with his comments on the excessive hubris within their society and lastly his belief that destiny will always reign over humanity contribute fully to his role as a commentator on Edwardian and Georgian times and society. ...read more.