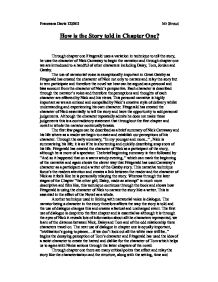 How is the Story told in Chapter One? Through chapter one Fitzgerald uses a variation in technique to tell the story, he uses the character of Nick Carraway to begin the narration and through chapter one we are introduced to a handful of other characters including Daisy, Tom, Jordan and Gatsby. The use of narratorial voice is exceptionally important in Great Gatsby as Fitzgerald has created the character of Nick not only to narrate and relay the story but in tern participate and therefore the novel we hear can be argued as a personal and bias account from the character of Nick's perspective. Each character is described through the narrator's voice and therefore the perceptions and thoughts of each character are effected by Nick and his views. ...read more.

Fitzgerald has created the character of Nick as a participant of the story, although he is more of a spectator. The brief beginning summary is then followed by "And so it happened that on a warm windy evening.." which can mark the beginning of the narrative and again shows the clever way that Fitzgerald has used Carraway's character as a participant and a writer of the Gatsby story. This narrative technique focus's the readers attention and creates a link between the reader and the character of Nick as it feels like he is personally relaying the story. Whereas through the later stages of the Chapter "the other girl, Daisy, made an attempt" is much more descriptive and film like, this technique continues through the book and shows how Fitzgerald is using the character of Nick to narrate the story like a writer. ...read more.

The next use of dialogue in chapter one is equally important, "civilization's going to pieces....if we don't look out all the white race will be.." begins the decaying perception of Tom's character and Fitzgerald has used the idea of a racist character to create the hatred and dislike for the character of Tom which helps us to agree with Nicks actions through the latter chapters of the novel. Through chapter one there are many critical points that effect and relay the story like the characterisation and the structure, along with the setting, time and context but the point of view of the narrator Nick dominates through the early descriptive judgements and this strong narratorial voice is essential in the telling of the story whilst Fitzgerald has also used the complicated and descriptive writing of Nick to establish the varying characters. ?? ?? ?? ?? Francesca Davis 12SBD Mr Stroud ...read more.