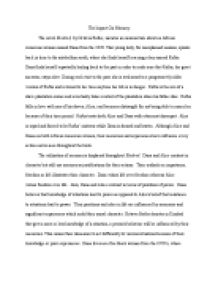 Impact of Memory in &quot;Kindred&quot; by Octavia Butler

﻿The Impact On Memory The novel Kindred, by Octavia Butler, narrates an unusual tale about an African American woman named Dana from the 1970. This young lady, for unexplained reasons, spirals back in time to the antebellum south, where she finds herself rescuing a boy named Rufus. Dana finds herself repeatedly hurling back to the past in order to make sure that Rufus, her great ancestor, stays alive. During each visit to the past, she is welcomed to a progressively older version of Rufus and returned to her time anytime her life is in danger. Rufus is the son of a slave plantation owner and eventually takes control of the plantation when his father dies. Rufus falls in love with one of his slaves, Alice, and becomes distraught for not being able to marry her because of their time period. Rufus treats both Alice and Dana with uttermost disrespect. Alice is raped and forced to be Rufus? mistress while Dana is abused and beaten. Although Alice and Dana are both African American women, their memories and experiences have influence every action and is seen throughout the book. The utilization of memory is displayed throughout Kindred. Dana and Alice contrast in character but still use memory as justifications for their actions. Their outlook on importance, freedom or life illustrates their character. Dana values life over freedom whereas Alice values freedom over life. ...read more.

An examples of Dana using knowledge to her advantage can be found when she was tending to Alice?s wounds after she had been brought back after her attempted escape. She says, ?I washed it with plenty of soap and water, and I put medicine on it. Here, brine will have to be my medicine? (Butler 147). Dana knew to clean Alice?s wounds with soap and water, and she knew to use brine because salt will prevent infections. Dana also, prior to her attempted escape, believes that with a map, she would be successful in escaping, which was apparent when she said, ?he threatened to? destroy a paper that might help me get free? (Butler 142). Rufus held a map of the area hostage against Dana because the map gave her power, the power to leave whenever she wanted and, potentially, the power to be successful in her leaving. Dana?s high regard for her knowledge quickly dissipates after she gets caught for trying to escape from Rufus? plantation to find Kevin. ?I probably knew more than she did about the general layout of the Eastern Shore. She knew only the area she?d been born and raised in, and she couldn?t read a map. I knew about towns and rivers miles away?and it hadn?t done me a damned bit of good!? (Butler 177). At this point, Dana had abandoned her view that the knowledge she possessed prior to her trips to the antebellum south would bring her power. ...read more.

Her street style of writing was not favorable to her professor, so she changed her writing style to what she thought the professor wanted. ?I was trying not to write like I really talked because I knew that would be rejected? (Richardson Intro). People do things like this all the time; they format themselves in a way so their future experiences are better than their past ones. If not for memory, the same outcomes can happen over and over again. Memory plays an important role in Kindred. The actions of Alice and Dana were greatly influenced by their experiences, backgrounds, and knowledge. Dana was influenced by her time, and so was Alice. Though they were both essentially the same, African American women forced into slavery, their memory influenced their personality enough so that they clashed in morals like power and what is important in life. Dana is from a time where knowledge leads to advantage so she valued it higher, and Alice is from a time where slaves are supposed to be submissive, so resisting gave her power. Dana valued life more than Alice, who wanted nothing more than to be free. Dana values life more than freedom because she has reason to continue living; she wants to return to her 1976 life with Kevin. Alice values freedom more because, as a slave, she wants to be in control of her own life and make her own decisions, to be free to do whatever she wants whenever she wants. ...read more.