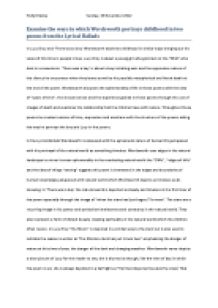 ﻿Holly Mozley Sunday, 25 November 2012 Examine the ways in which Wordsworth portrays childhood in two poems from the Lyrical Ballads ________________ In Lucy Gray and ?There was a boy? Wordsworth examines childhood in similar ways bringing out his views of this time in people?s lives. Lucy Gray is about a young girl who gets lost on the ?Wild? who died in a snowstorm. ?There was a boy? is about a boy imitating owls and the oppressive nature of the silence he encounters when they leave as well as his possibly metaphorical and literal death at the end of the poem. Wordsworth discusses the ephemerality of life in these poems with the idea of ?spots of time?, the innocence lost and the experience gained in these poems through the use of images of death and examines the relationship that the children have with nature. Throughout these poems he creates tensions of time, expression and emotions with the structure of the poems aiding the way he portrays the boy and Lucy in the poems. In the Lyrical Ballads Wordsworth is obsessed with the ephemeral nature of human life juxtaposed with his portrayal of the natural world as something timeless. Wordsworth uses edges in the natural landscape to mirror human ephemerality in the everlasting natural world the ?Cliffs?, ?edges of hills? and the idea of things ?setting? suggests this poem is interested in the edges and boundaries of human knowledge juxtaposed with natural world which Wordsworth depicts as timeless as all-knowing. ...read more.

Or it is also argued that this is the depiction of the death of Wordsworth?s own childhood and the gaining of experience. Wordsworth?s poems about children often focus around events that allow them to gain experience and lose their childish innocence which Wordsworth places a great value on in the Lyrical Ballads. In ?There was a boy? the poem progresses from the hubristic qualities combined later on in the poem with regret and surprise through the loss of innocence whereas Lucy Gray retains her innocence. The ?mimic hootings? that the boy creates are a disguise as though he believes his skill is so great that he can do this can cause chaos in nature. However, the verbs describing the noises the owls depicts the apparent calamity the boy has caused as there are ?quivering peals?, ?long halloos?, ?screams? and ?echoes?. This creates a very eerie scene as the onomatopoeic sounds suggest that the boy has let the situation get out of control. The verbs suggest the terror felt in the moment by the owls and also by the boy. This contrasts to the ?pauses of deep silence [that] mock?d his skill? which suggests although he this skill he is not using it to the greatest effect and not truly communicating with nature. This is combined with a sense of regret and surprise as the ?mountain torrents?, ?the visible scene? and ?all its solemn imagery? ?enter unawares into his mind?, at this moment of the poem ...read more.

The imagery at the end of the poem has images which give the poem a degree of ambiguity about what happened to the boy. The words ?hung?, ?grave? and the phrase ?into the bosom of the steady lake? evokes images of death and the afterlife. However, only the final line ?for he died when he was ten years old.? is end-stopped so gives the poem finality and is assumed to be the death of this Boy but it is also argued that this can be seen as the death of Wordsworth?s childhood too. In Lucy Gray Wordsworth describes her as an integral part of the landscape ? as if there is no difference between the two. The images of ?the Fawn?, ?the Hare upon the Green?, ?the mountain roe? makes Lucy as delicate and ?sweet? as these animals and things ? which are everyday parts of Wordsworth?s natural landscape. For Lucy nature is something she is part of especially as ?she is a living Child? remaining even in death in the landscape. Wordsworth uses the natural world as a teacher for children and something that shows the ephemerality of childhood. In the two poems examined he wants to exhibit the innocence lost and experience gained as well as showing how a child can be in an everlasting state of innocence if they die in the natural landscape. The natural landscape is a determining force in Wordsworth?s poetry. Throughout the two poems he suggests that our interaction with the natural landscape makes us who we are, shaping us entirely. ...read more.