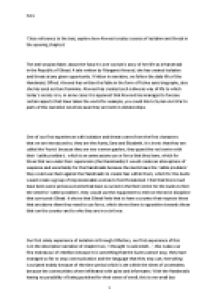 In &quot;The Handsmaids Tale&quot; explore how Atwood creates a sense of isolation and threat in the opening chapters

﻿Katie ?Close reference to the text; explore how Atwood creates a sense of isolation and threat in the opening chapters? The anti-utopian fable, about the future is one woman?s story of her life as a Handmaid in the Republic of Gilead. A tale written by Margaret Atwood, she has created isolation and threat at any given opportunity. Written in narrative, we follow the daily life of the Handmaid, Offred. Atwood has written the fable in the form of fictive auto biography, also she has used ecriture feminine. Atwood has created such a diverse way of life to which today?s society is in, in some cases it is apparent that Atwood has managed to foresee certain aspects that have taken the world for example, you could link to Syrian civil War to parts of this narrative novel because they are both in dictatorships. One of our first experiences with isolation and threat comes from the first characters that we are introduced to, they are the Aunts; Sara and Elizabeth, it is ironic that they are called the ?Aunts? because they ...read more.

I feel that because Offred is acting rebellious at such an early stage this could be foreshadowing that there is some form of rebellion is to take place later on in the book. Atwood may have done this to show that even early on in the book that the fear is never ending, something of which Atwood has decided to show fear in a multitude of way. We are introduced to the formidable ?Angels? in the first Chapter, not all of the Angles are Guards; they have been specifically picked out. We are informed that the Angles never venture ?inside to the building? (which was Harvard University in a previous life) which creates a sense of threat, because this suggests the idea to the fact why are the Handmaids under constant surveillance, which conveys the concept that for whatever they a participating in unknowingly they are vital for whatever is going on there. For the Handmaids they are in a position of uncertainty because they are in an environment that is surrounded by distrust throughout society. ...read more.

Though a ?wreath? is also used at Christmas and is placed on doors, which gives the term that it is partially an oxymoron. In the context that it is used in this book I would personally think that the ?wreath? refers to an event that had happened with the previous Handmaid. This does create a sense of threat because why would Atwood feel the need to describe something that has such bad connotations associated with it. There is isolation with the Handmaid due to the fact she cannot ask questions to people as they may wonder why she has such an interest into the subject. It seems that this book is very ambiguous for interpretation, already. I feel this because it already has such a large amount of threat and isolation already playing quite a large role. I think Atwood is making this narrative novel show what can happen when threat and isolation plays such a key in society, and how it must not happen. Overall, you can tell that the ending is unlikely to be one where everything is resolved without death or betrayal. ...read more.