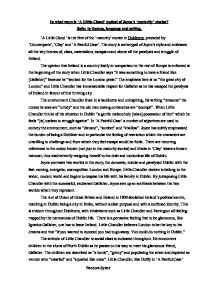 In what ways is 'A Little Cloud' typical of Joyce's 'maturity' stories? Refer to themes, language and setting. 'A Little Cloud' is the first of the 'maturity' stories in Dubliners, preceded by 'Counterparts', 'Clay' and 'A Painful Case'. The story is archetypal of Joyce's style and embraces all the key themes of, class, materialism, escapism and above all the paralysis and struggle of Ireland. The opinion that Ireland is a country lowly in comparison to the rest of Europe is enforced at the beginning of the story when Little Chandler says "it was something to have a friend like [Gallaher]" because he "worked for the London press." The emphasis here is on "the great city of London" and Little Chandler has immeasurable respect for Gallaher as he has escaped the paralysis of Ireland in favour of this thriving city. The environment Chandler lives in is lacklustre and uninspiring, his writing "tiresome" the nurses he sees are "untidy" and the old men dozing on benches are "decrepit". When Little Chandler thinks of his situation in Dublin "a gentle melancholy [takes] possession of him" which he feels "[is] useless to struggle against". In 'A Painful Case' a number of adjectives are used to convey the environment, such as "disused", "sombre" and "shallow". Joyce has subtly emphasised the burden of being a Dubliner and in particular the feeling of restriction which the characters are unwilling to challenge and from which they feel escape would be futile. ...read more.

The maturity stories all contain the presence of resentment in the main characters at the inevitable situation they have resigned themselves to living in. Joyce conveys Little Chandler's anger with a number of adjectives such as "trembled", "burst", "convulsively" and "a paroxysm of sobbing". His cheeks later "suffuse" with shame which gives way to "tears of remorse" at his failure not only to fulfil his dreams but for the resentment he feels towards his family for thwarting his freedom. In 'Counterparts' there is an established mood of anger with a "bell rung", "a heavy step" and Farrington's "spasms of rage". Joyce uses the symbol of the 'little cloud' as an image of entrapment, not just hope; the little cloud of unhappiness hovering over his marriage to Annie, which restricts him from being the fun-loving bachelor like his idol Gallaher. Joyce incorporates the fantasy and captivation of exoticism and wealth in the 'dark Oriental eyes' of the Rich Jewesses. Similar to fantasies of the East Joyce uses alcoholism as a method of 'escape' from the stifling lives of the Dubliners and this is particularly prominent in 'A Little Cloud'. Gallaher states that he "drinks [his whisky] neat" and that Little Chandler, who drinks very little "doesn't know what's good for [him]". Sobriety is here seen as the reason why Chandler's life is so 'inartistic' and dreary in comparison to Gallaher's. Ireland is belittled and viewed as an engaging absurdity by the English when Gallaher says "they've got a great feeling for Ireland" and the English "were ready to eat [him]" because he was Irish. ...read more.

In 'A Painful Case' Duffy becomes disillusioned with escaping, when "Mrs Sinico caught up his hand passionately" and similarly Little Chandler begins to wildly question "Could [I] go to London?", "[is] it too late?" But Duffy bids his only distraction from the paralysis of Dublin Mrs Sinico, goodbye and is blatantly scared of commitment. The reunion with a conceited Gallaher reminds Little Chandler of what he hasn't achieved and he feels resentment which he thus inflicts on those around him. 'A Little Cloud' is an evident example of Joyce's maturity stories in keeping with the aspect that binds them together, the characters' comprehension that all endeavours to escape are fruitless. Little Chandler and Duffy lacked conviction and ignored the opportunity that was once given to them for escape, something they blame everyone but themselves for. The characters Joyce writes of do not appreciate what they have, mourning instead for what they do not. The Dubliners are, like the city, reluctant to change and yet are embittered by the injustice of their paralysed lives. Duffy does not appreciate until the death of Mrs Sinico, that he will never have a chance of marriage, or to love, through which he could have forgotten the monotony of the city he cannot escape. Congruously, Little Chandler dismisses his family throughout 'A Little Cloud' and when his personal epiphany dawns on him he realises his failure to his family, "his cheeks suffuse with shame" and he cries with "tears of remorse" as much out of guilt at the egocentric way he has behaved, as for his hopeless venture of escape. Pandora Sykes ...read more.