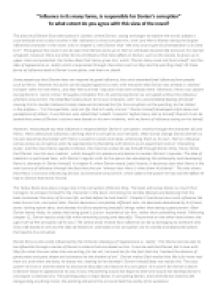 Influence in it's many forms is responsible for Dorian's corruption - to what extent do you agree with this view of the novel?

﻿?Influence in its many forms, is responsible for Dorian?s corruption? To what extent do you agree with this view of the novel? The picture of Dorian Gray takes place in London, where Dorian, young and eager to explore the world, adopts a cruel attitude and a sinful routine in life. Influence is what corrupts him, with Lord Henry Wotton being the largest influential character in the novel, who in chapter 2, tells Dorian that ?the only way to get rid of temptation is to yield to it?. Throughout the novel it can be seen that Dorian picks up on Henry?s attitudes towards life and even his manner of speech, however there are other forms of influence that take effect on Dorian, such as the society he grew up in; upper class and protected, the Yellow Book that Henry gives him; which ?Dorian Gray could not free himself? and the idea of appearance vs. reality which is expressed through characters such as Sibyl and the painting itself. ...read more.

Henry thinks that Dorian ?was his own creation?, which brought him pleasure and desire to awaken Dorian?s impulses. The idea of hedonism is portrayed here, with Dorian?s regular visits to the opium den developing this philosophy and developing Henry?s character in Dorian himself. In chapter 4, when Dorian meets Lady Victoria, it becomes clear that Henry is the main source of influence through the fact that she can ?always hear Harry?s views from his friends?. This also shows that Henry is not only influencing Dorian, but everyone around him, which adds to the power he has and the effect he had on Dorian that led to his end. The Yellow Book also plays a large role in the corruption of Dorian Gray. The book entrances Dorian so much that he begins to compare himself to the character in the book, mimicking his terrible lifestyle and believing that the book contained ?the story of his own life, written before he had lived it?. ...read more.

The painting plays a major factor in corrupting Dorian, and while Dorian lived his life disregarding anything moral, the painting stored all his sins and held the reality of his existence. Dorian?s downfall and his corruption come about because Lord Henry?s influence has wrecked him. Worshiping youth and beauty above all else leads him to loathe the portrait that exposes his true soul. Dorian?s death exemplifies Wilde?s meaning of the word ?influence? ? Dorian has been influenced the most by Henry?s words, and has chosen to live his life concentrating on beautiful things and indulgences. Henry ?had made him premature?; Dorian was incapable of coping with the taunt he would have to go through in his life. Moreover, Henry had given him the yellow book that developed the sinful ideas in Dorian, fully overriding Henry?s absence after chapter 11. Henry is mainly responsible for Dorian?s corruption as he was the one who influenced him, he was the one that made Dorian wish upon the portrait after stating that ?there is absolutely nothing in the world but youth!?. ...read more.