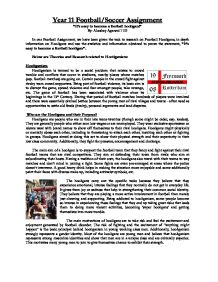 Year 11 Football/Soccer Assignment "It's easy to become a football hooligan!" By: Akashay Agarwal 11D In our Football Assignment, we have been given the task to research on Football Hooligans, in depth information on Hooligans and use the statistics and information obtained to prove the statement, "It's easy to become a football hooligan". Below are Theories and Research related to Hooliganism: Hooliganism Hooliganism is termed to be a social problem that relates to crowd trouble and conflicts that occur in stadiums, nearby places where matches (esp. football matches) are going on. Certain people in the crowd fight against rivalry team crowd supporters. Being part of football violence, its basic aim is to disrupt the game, spread violence and fear amongst people, take revenge, etc. The game of football has been associated with violence since its beginnings in the 13th Century. During that period of football matches hundreds of players were involved and there were essentially pitched battles between the young men of rival villages and towns - often used as opportunities to settle old feuds (rivalry), personal arguments and land disputes. Who are the Hooligans and their Purpose? Hooligans are people who are in their late teens-twenties (though some might be older, esp. leaders). They are generally people who either earn low wages or are unemployed. They wear exclusive sportswear or leisure wear with brand names to show off themselves to their rival hooligans. Hooligans might physically or mentally abuse each other, including to threatening to attack each other, insulting each other or fighting in groups. Hooligans aimed at doing this act to show their physical strength and their superiority in their low class community. ...read more.

The English officials believe that these racial groups need to be sought out, in order to prevent the spread of racial discrimination, which can result in deadly effects to the game and the atmosphere of the football matches. In Appendix A, there is a list of football teams and their associated hooligan groups. Hooligan linked to Football Hooliganism is linked to football due to the traditional aggressiveness of the game, the working class workers competitiveness and also due to the culture of the game of exhibiting territorial and masculine power. It is also a symbolic representation in English Football where it represents the struggle of two 'men' teams aiming at showing their masculine powers. Additionally, the aggressiveness and hardness on the field have been one of the many reasons why men have enjoyed watching masculine challenges and have resulted in the growth of hooliganism (though now decreasing due to increase strictness of police authorities). Many reputated players have been famous for their aggressiveness on the field and have been fined thousands of pounds, some even being banned for a number of matches. Thought, it is still believed that this is not the main reason, as hooligans appear to strike even before the start of the matches! Other instances, such as dressing room punches and players boasting about their masculine battle fields have caused to be an inspiration of encouragements to the hooligans. However, one other main reason is that football is one of the oldest sports known and since past has had hooligan cases. In the past, when old tribes used to play, it was a clash of tribes to exhibit their power and superiority. This trend led to many violent scenes both in and out of field, and since then has not been a representation of two teams, but of two tribes/cities/towns. ...read more.