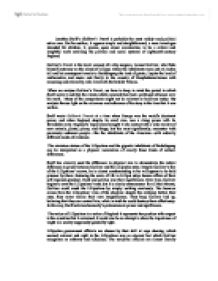 Jonathan Swift's Gulliver's Travel is probably the most widely read political satire ever.

Jonathan Swift's Gulliver's Travel is probably the most widely read political satire ever. On the surface, it appears simple and straightforward, a mere travelogue intended for children, it, proves, upon closer examination, to be a critical and insightful work satirizing the political and social systems of eighteenth-century England. Gulliver's Travel is the travel account of a ship surgeon, Lemuel Gulliver, who finds himself castaway on the island of Lilliput, where the inhabitants were just six inches tall and his consequent travels to Brobdingnag-the land of giants, Laputa-the land of mathematics and music and finally to the country of Houyhnhnms-horses with reasoning and rationality, who lived with the brutish Yahoos. When we analyse Gulliver's Travel, we have to keep in mind the period in which Swift wrote it and that the events which occurred then had a profound influence over his work. Many of the comparisons might not be relevant or hold true today. My analysis throws light on the relevance and reference of his story in the time that it was written. ...read more.

The would-be officials are almost literally forced to jump through hoops in order to qualify for their positions. This is was an attack on England's system of political appointments that was similarly arbitrary. The story narrated by Gulliver coincides with European history exactly. The two political parties of the Lilliputians, the High Heels and the Low Heels correspond to the Whigs and Tories of English polity. The two political parties being differentiated by the height of their heels points out how little substantive difference there was between Whig and Tory. Lilliput and Belfuscu represent England and France. By signing off European history as a series of brutal wars over meaningless and insignificant disagreements, Swift implies that the differences between Whigs and Tories and France and England are equally silly and meaningless as how one chooses to crack an egg. This has implications in today's world, with the Catholics and Protestants, the various religious fundamentalists and The most ironical criticism of European civilization occurs when, after offering the secret of gunpowder to the King and his subsequent horrified refusal, Gulliver declares the King to possess "narrow principles and short views!" ...read more.

The point is emphasised when Gulliver professes his admiration for projects such as extracting sunbeams from cucumber and building houses from the roof down. Swift attacks both the lack of common sense and the result of corrupt judgement. Gulliver's final destination was the land of Houyhnhnms, where Houyhnhnms represent perfect reason, untouched by irrationality or excessive emotions. Yahoo, who look and act like humans stripped of reasoning, casts a light on the defects of human nature. Swift moves from veiled attacks to rather direct blows to the subjects of war, which is destruction clad in the pretext of valour and patriotism, lawyers, a lot of social parasites, who measure their worth by their dexterity at deception, thus inhibiting justice, and money, which feeds the greed of few by the labour and poverty of many. Towards the conclusion of the novel, the Swift through Gulliver describes his total rejection of European government and society. He longs for an ideal country such as the land of Houyhnhnms to live in. Swift was one of the many Europeans who were unhappy with the political and social environment in Europe. This led to migration to the New World, America-the land of Houyhnhnms, was what many unhappy Europeans hoped it to be. ...read more.