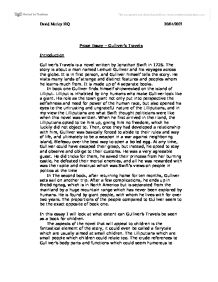 Gulliver's Travels is a novel written by Jonathan Swift in 1726.

Prose Essay - Gulliver's Travels Introduction Gulliver's Travels is a novel written by Jonathan Swift in 1726. The story is about a man named Lemuel Gulliver and his voyages across the globe. It is in first person, and Gulliver himself tells the story. He visits many lands of strange and distinct features and peoples whom he learns much from. It is made up of 4 separate books. In book one Gulliver finds himself shipwrecked on the island of Lilliput. Lilliput is inhabited by tiny humans who make Gulliver look like a giant. His role as the town giant not only put into perspective the selfishness and need for power of the human race, but also opened his eyes to the untrusting and ungrateful nature of the Lilliputians, and in my view the Lilliputians are what Swift thought politicians were like when this novel was written. ...read more.

At any time, Gulliver could have escaped their grasp, but instead, he opted to stay and observe and oblige to their customs. He was a very agreeable guest. He did tricks for them, he saved their princess from her burning castle, he defeated their mortal enemies, and all he was rewarded with was their spite and mistrust which was Swift's views on people in politics at the time In The second book, after returning home for ten months, Gulliver sets sail on another trip. After a few complications, he ends up in Brobdingnag, which is in North America but is separated from the mainland by a huge mountain range which has never been explored by humans. ...read more.

The crude references to Gulliver's body parts and functions which could seem humorous to children, also the description of how Gulliver lives could appeal to children. These features could lead adults to think this was solely a children's book. On the other hand the aspects that could appeal to adults are the fact that it is a satire on the government and the state of Europe in Swift's Time. Gulliver's description of their government, way of life, and logic patterns reflected in which many decisions, traditions, and ways of living developed in our own society. The quote from book two said by the King of Brobdingnag "the bulk of your natives, to be the most pernicious race of little odious vermin that nature ever suffered to crawl upon the surface of the earth" could be how some adults think of the world today. ...read more.