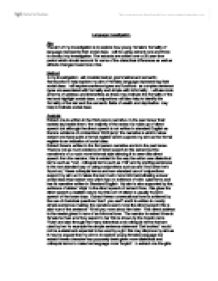 Language Investigation. In my investigation I will consider lexical, grammatical and semantic frameworks to help explore my aim of females language representing their social class.

Language Investigation Aim The aim of my investigation is to explore how young female's formality of language represents their social class. I will be using extracts one and three to conduct my investigation. The extracts are written over a 30 year time period which should account for some of the dialectical differences as well as attitude changes toward s*x roles. Method In my investigation I will consider lexical, grammatical and semantic frameworks to help explore my aim of females language representing their social class. I will explore sentence types and functions as complex sentence types are associated with formality and simple with informality, I will also look at terms of address and intensifiers as these may indicate the formality of the text and highlight social class, conjunctions will also help to identify the formality of the text and the semantic fields of wealth and deprivation may help to indicate social class. Analysis Extract one is written in the third person narrative in the past tense 'their rackets lay beside them,' the majority of the extract is made up of direct speech but although the direct speech is not written in standard English as there is evidence of contractions 'We'll jump' the narrative ...read more.

would not be a statement expected to be used by a girl this may disprove my aim as it may be argued that my aim is to explore young females language but extract threes character has purposely been given more dialectical and colloquial terms to make her language more 'boyish'. In extract one the girls speak in imperatives 'I'll say this, and you say that,'. The direct speech in extract one shows quite extended vocabulary use and they are complex sentences but the direct speech in extract one has limited vocabulary use and are quite simple sentences this supports my aim as a higher social standing would give rise to an extended vocabulary though better education especially at the time the texts were written, however in extract three the narrative shows evidence of complex sentences it is just the direct speech that uses mostly simple sentences. The terms of address in extract one such as 'Mummy' and 'Daddy' and also the terms of address in the narrative to the young girls parents 'Mrs O'Sullivan' 'Mr O'Sullivan' show a level of formality however in extract three the terms of address have a more informal tone such as 'Mum' and the use of 'Bonfire' when ...read more.

However this may also be due to the audience that these extracts were written for, extract one may be aimed at higher social classes and therefore the language used in it will reflect this and the same would go for extract three, this may be aimed at lower classes so the use of non standard vernacular forms would be more evident. This can be supported by Bells Audience design theory bell stated that a speaker will shift their style to accommodate their audience so a writer may shift his or her writing style to accommodate their target audience. Evaluation My investigation went quite well, however if I repeated it I would of maybe focused on gender and how attitudes to females have changed as these two texts were written over 30 years apart and therefore we could expect a difference in attitude between them. I would tried to support my aim with theorists such as Lakoff who suggested that women use hyper correct grammar this would of helped to support my aim as Lakoff's theory was quite dated so it may have applied when the first text was written but less when the third was written. ...read more.