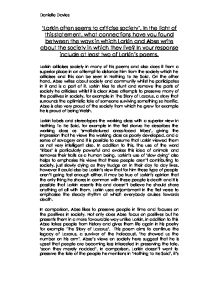 Larkin often seems to criticise society. In the light of this statement, what connections have you found between the ways in which Larkin and Abse write about the society in which they live? In your response include at least two of Larkins

'Larkin often seems to criticise society'. In the light of this statement, what connections have you found between the ways in which Larkin and Abse write about the society in which they live? In your response include at least two of Larkin's poems. Larkin criticises society in many of his poems and also does it from a superior place in an attempt to distance him from the society which he criticises and this can be seen in Nothing To Be Said. On the other hand, Abse writes about society and community whilst he participates in it and is a part of it. Larkin tries to stunt and remove the parts of society he criticises whilst it is clear Abse attempts to preserve many of the positives in society, for example in The Story of Lazarus, a story that surrounds the optimistic tale of someone surviving something so horrific. ...read more.

Larkin uses enjambment in the first verse to emphasise the steady rhythm at which everybody cruises towards death. In comparison, Abse likes to preserve people in time and focuses on the positives in society. Not only does Abse focus on positives but he presents them in a more favourable way unlike Larkin, in addition to this Abse takes people from history and gives them life again in his poetry for example 'The Story of Lazarus'. This poem aims to continue the legacy of Lazarus, a survivor of the holocaust, 'he showed us the number on his arm'. Abse's views on society here suggest that he is upset that people are becoming less interested in preserving the tale, 'soon they merely nodded'. In comparison, Larkin doesn't want to preserve the tale of the people he mentions in 'Nothing To Be Said', it's as though the repetition of 'Slow dying' is emphasising that for Larkin, it wasn't slow enough. ...read more.

In addition to this, the train journey could be a metaphor for Larkin's inability to adapt to ever changing society and the fast pace that it moves. To conclude, Abse celebrates people within society and relishes the opportunity to be a part of it, where as Larkin tries distinctly hard to distance him from the ever modernising world, in attempt to disguise his insecurities and promote his sense of superiority. This superiority removes any doubt in Larkin's mind that he could be wrong and therefore missed out on so many things in life. Abse on the other hand is proud of the society from which he came, especially emphasises his Welsh nationality and in addition to this his Jewish faith. To conclude, Larkin's poems reflect on all that is missing in society, while Abse is in the middle of it and making the most of everything positive society has to offer. ?? ?? ?? ?? Danielle Davies ...read more.