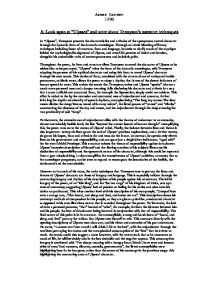 Look again at Ulysses and write about Tennysons narrative techniques

A: Look again at "Ulysses" and write about Tennyson's narrative techniques In "Ulysses", Tennyson presents the characteristics and attitudes of the eponymous central character through the dynamic form of the dramatic monologue. Through an adroit blending of literary techniques including those of structure, form and language, he seeks to clarify much of the mystique behind the mythological background of Ulysses, and reveal his persona of desire and heroism, alongside his undesirable traits of contemptuousness and hubristic pride. Throughout the poem, its form and structure allow Tennyson to reveal the character of Ulysses as he wishes him to be portrayed. "Ulysses" takes the form of the dramatic monologue, with Tennyson adapting the persona of his mythical character and using this form to reveal Ulysses' character through his own words. This choice of form, combined with the structural use of unrhymed iambic pentameter, or blank verse, allows the poem to adopt a rhythm that is one of the closest imitators of human speech in verse. This makes the words that Tennyson, writes and Ulysses "speaks" take on a much more personal tone and a deeper meaning, fully disclosing his character and attitude in a way that a more artificial and structured form, for example the Spenserian, simply could not achieve. This effect is added to the by the extensive and contrasted uses of enjambment and caesurae, further imitating the depth and sincerity of speech rhythms, examples being "The long day wanes: The slow moon climbs: the deep/Moans round with many voices", the listed pauses of "wanes" and "climbs" accentuating the slowness of the day and moon, and the enjambment through the deep stressing the true profundity of said "deep". Furthermore, the extensive use of enjambment allies with the themes of endeavour to an excessive, almost unattainably foolish level, the line "beyond the utmost bound of human thought" exemplifying this, the poem runs on to the excess of Ulysses' mind. ...read more.

In conclusion, Tennyson uses many literary devices to portray the nature and attitudes of the mythological character of Ulysses. Through artfully blending technically adept poetic devices against the purest echo of human speech, he reveals the multi faceted character of Ulysses through his words, allowing the reader to fully understand the motives behind Ulysses' seemingly limitless ambition, and the more sinister power that this ambition can hold to the detriment of the individual- a powerful message to society, as well as an exploration of one of the most remarkable characters of mythology. B: How far do you agree that the character of Ulysses is far from heroic? Tennyson's dramatic monologue, "Ulysses" has been subjected to many literary interpretations since its first drafting in 1833, just weeks after the death of Tennyson's closest friend, Hallam. One of the most debated points is on the nature of Ulysses' character in relation to heroism, and whether he is the typically zealous and gallant mythological king, or a misguided and erroneously na�ve individual, who obsessively seeks the unattainable alongside a malicious contempt for those for who he should hold responsibility. Of course, the concept of heroism is not the only interpretation of the character of Ulysses that has been presented- ideas of responsibility and of social symbolism have also been put forward. Ever since its publishing, literary critics have understood "Ulysses" to have the underlying theme of heroism with it, and one of the secondary interpretations of this is that the character of Ulysses is in fact far from heroic. Chiasson states that Ulysses is "a type of human being who held a set of ideas which . . . [are] destructive of the whole fabric of his society", suggesting that he was not in fact a hero, but someone with no comprehension of responsibility for his people, to the extent of selfish desire over support of his people. ...read more.

can be portrayed is that of a desire to go forward from Hallam's death, as Charles Tennyson put it in his 1849 biography, "Tennyson "expressed his realization of the need for going forward and braving the battle of life, in spite of the crushing blow of Arthur's [A. Henry Hallam's] death"- this is highlighted in Ulysses' desire for exploration and experience, "I will drink life to the lees". A second idea is that of Tennyson wishing to regress into a stupor of death, as the resigned and almost suicidal air of the closing lines of the monologue indicates, to an extent, an example being "It may be that the gulfs will wash us down,/It may be that we will touch the Happy Isles", as if he wishes to join Hallam in the "Happy" comfort of death. As effectively explained by Thomson, the poem could be "recognizably the product of internal debate", suggesting that Tennyson's confusion over his own reaction to Hallam's death comes out in the two sides to Ulysses' attitude to adventure in the poem itself. Finally, the closing line, "To strive, to seek, to find, and not to yield" came to be a symbol for the people of the Victorian age, a symbol of proactivity and change that they could fully relate to, ironically in contrast to the receptors of Ulysses in the monologue itself, his "savage race". In conclusion, I agree that the character of Ulysses is far from heroic. His contemptuousness in terms of his people, combined with the overly hubristic and foolish desires upon the greatest of knowledge shows him to be an egocentrically misguided character, despite some of the qualities portrayed by Tennyson seeming, and being admirable. However, on a grander scale I feel that he character of Ulysses is more driven by Tennyson's feelings than the individual portrayed in Homer's "Odyssey" and Dante's "Inferno", with the character representing more than anything the deeply personal and highly conflicting emotion of grief. ?? ?? ?? ?? James Hansen 12BG ...read more.

An extremely cogent and well written essay. To a relatively open-ended question the writer maintains a strong, clear focus on narrative technique. Each paragraph uses topic sentences effectively and the essay is explicitly split into different types of narrative technique.

An extremely cogent and well written essay. To a relatively open-ended question the writer maintains a strong, clear focus on narrative technique. Each paragraph uses topic sentences effectively and the essay is explicitly split into different types of narrative technique.

Analysis throughout is rigorous; the writer uses embedded quotes, which makes the essay flow more naturally, and follow quotations with a consideration of the meaning created by the structure and language used. The phrase Ã¢â‚¬Å“ the final patronising and heavily accented Ã¢â‚¬Å“I mineÃ¢â‚¬Â implying...Ã¢â‚¬Â exemplifies how the writer includes structural analysis (Ã¢â‚¬Å“heavily accentedÃ¢â‚¬Â) with an interpretation of meaning (Ã¢â‚¬Å“patronisingÃ¢â‚¬Â) and uses a quote as evidence of this interpretation. The evaluation of interpretations could be extended: whilst the writer often gives several different thoughts on what quotations mean, there is not a constant evaluation of whether these are likely, or which the writer feels is the most likely. This would add a layer of personal response to the essay Ã¢â‚¬â€œ not going so far as to write entirely in the 1st person, but showing the reader that they have engaged and connected personally with the text. A place where the writer could evaluate is paragraph 5, where they write Ã¢â‚¬Å“ This can be interpreted in many ways -Ã¢â‚¬Â and go on to list ideas. Which of these is coherent with the rest of the poem? What is the effect on the reader of Ulysses becoming merely Ã¢â‚¬Å“a nameÃ¢â‚¬Â? (This could have also been linked to 'Lady Godiva' which is similarly interested in the concept of legacy.)
The conclusion adequately summarises and evaluates the previous points, and also refers back to the introduction (which is good as it makes the essay appear well planned and structurally coherent).

Excellent use of technical terms, particularly regarding form and structure: for instance, the writer's reference to meter (the poem is written in unrhymed iambic pentameter) displays a high level of knowledge, both about the poem and poetic devices. This is good as analysis of rhythm shows an advanced, deeper consideration of the text beyond the immediately noticeable language and imagery, etc. The writer meets and exceeds expectations for A Level work.