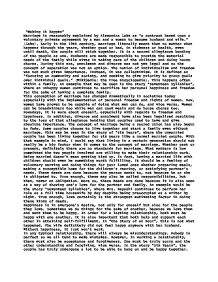 Marriage. An example that may be seen is the story Seventeen Syllables, where an unhappy woman continues to sacrifice her personal happiness and freedom for the sake of having a complete family.

"Making It Happen" Marriage is reasonably explained by Alexandra Laks as "a contract based upon a voluntary private agreement by a man and a woman to become husband and wife." (Laks). Early in the 19th century, marriage literally meant that no matter what happens through the years, whether good or bad, in sickness or health, even until death, the couple will stick together. It is a sacred allegiance bonding of two people as one. Husbands are made responsible to provide the material needs of the family while wives in taking care of the children and doing house chores. During this era, annulment and divorce was not yet legal and so the concept of separation was not an option. The notion of individualism and freedom was not much given importance. Instead, it was collectivism. It is defined as "focusing on community and society, and seeking to give priority to group goals over individual goals." (Wikipedia: the Free Encyclopedia). This happens often within a family. ...read more.

This may be seen in the story of "Six Years", where the unmarried couple has been living together for six years like a normal married couple. With that example in mind, I would say that living in a certain generation should not really be a big factor when it comes to the concept of marriage. Whether past or present, definitely there are no standards for marriage. What matters is how committed the two people involved are willing to make their relationship work. Being married doesn't mean getting tied up. In fact, having a married life with children should even be something worth fulfilling. It should be a feeling of voluntary serving and doing things for your loved ones whether preparing meals, making a susceptible home for the children's rearing, or satisfying partner's needs. These deeds are done because the person wants to, not because he or she is obligated to. ...read more.

Nobody is perfect so we all tend to make mistakes. However, in working a relationship, there must also be acceptance and forgiveness. One must be truly sorry and the other understanding and forgiving, vice versa. In the story "Six Years", the couple has truly undergone a lot to be able to hang on and be happy together. They have accepted and somehow understood each other completely. They have outgrown their weaknesses and eventually became stronger as a couple. These are some of the essential things that a couple must have and do to build a lasting relationship. The willingness to achieve this goal depends on the love they have for each other. There must be happiness and contentment in the things they do. Also, nobody is perfect, so learn to forgive and forget. Accept each others faults and learn from mistakes. Whatever generation a couple is in, marriage can always be an everlasting commitment, only if both man and wife will never give up on each other and really have that desire to make it happen. ...read more.