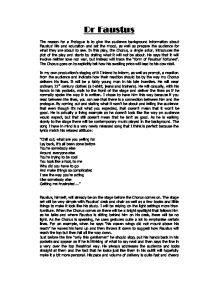 My own productions staging of Dr Faustus.

Dr Faustus The reason for a Prologue is to give the audience background information about Faustus' life and education and set the mood, as well as prepare the audience for what they are about to see. In this play, the Chorus, a single actor, introduces the plot of the play and starts by stating what it will not be about. He says that it will involve neither love nor war, but instead will trace the "form of Faustus' fortunes". The Chorus goes on to explicitly tell how his swelling pride will lead to his downfall. In my own production's staging of it I intend to inform, as well as prompt, a reaction from the audience and indicate how their reaction should be by the way my Chorus delivers his lines. It will be a fairly young man in his late twenties. He will wear ordinary 21^st century clothes (a t-shirt, jeans and trainers). ...read more.

I will be relying on the light settings more than furniture. When the Chorus comes on there will be a bright spotlight that follows him as he talks and where Faustus is sitting behind him on his desk, there will be no light. As the Chorus is speaking, he uses gestures quite a lot to emphasise certain lines. For an example, when he says "his waxen wings did not mount above his reach" he waves his hand up and then throws it down to suggest how Faustus will reach the top but then fall all the way down. Just before the line "only this gentlemen" he should stop, put his hands back in his pockets and appear as if he is thinking of what to say next and then says the line in a very over the top theatrical way. He always addresses the audience and looks straight at them and the fact that he looks just like them in his outfit will hopefully make it a bit more personal. ...read more.

There would not be any stage lights at that time and Faustus would probably come on the stage after the Chorus leaves. There would not be any background music and everything would be a lot more serious and there would be no need to emphasise any words to create a mystery, because at that time even the word necromancy was terrifying on its own. The Chorus would probably not have been advised to walk around much or put his hands in his pockets. He was to act as a gentleman and would stand on one side of the stage and make big gestures with his hands for the people in the back to be able to see. I don't think there would be much else on the stage and Faustus would be more likely to stand up than sit down because he needed to do big gestures in order for everyone to see which is hard to do when sitting down, and especially without a spotlight. ...read more.