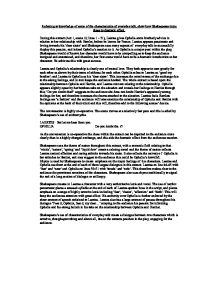 Referring to knowledge of some of the characteristics of everyday talk, show how Shakespeare turns these to dramatic effect. During this extract (Act 1, scene iii; lines 1 - 51), Laertes gives Ophelia some brotherly advice

Referring to knowledge of some of the characteristics of everyday talk, show how Shakespeare turns these to dramatic effect. During this extract (Act 1, scene iii; lines 1 - 51), Laertes gives Ophelia some brotherly advice in relation to her relationship with Hamlet, before he leaves for France. Laertes appears passionate and loving towards his 'dear sister' and Shakespeare uses many aspects of everyday talk to successfully display this passion, and indeed Ophelia's reaction to it. As Ophelia is a major part within the play, Shakespeare would of known her character would have to be compelling as to keep the audience intrigued and entertained, and therefore, her first scene would have to be a dramatic introduction to her character. ...read more.

Laertes feels Hamlets feelings are 'a fashion' and the audience will later examine the relationship of Ophelia and Hamlet with his opinions at the back of their mind and this will, therefore add to the following scenes' drama. The conversation is highly co-operative. The scene moves at a relatively fast pace and this is aided by Shakespeare's use of stichomythia. LAERTES But let me hear from you. OPHELIA Do you doubt that? As the conversation is co-operative the ideas within the extract can be depicted to the audience more clearly than in a highly charged exchange, and this aids the dramatic effect from the audiences reaction. Shakespeare uses the theme of nature throughout this extract, with a semantic field relating to that. ...read more.

The use of iambic pentameter places a stressed syllable at the end of each of Laertes spoken lines in the script, and places emphasis on a range of highly emotive lexis including 'fear', 'desire', 'affection' and 'birth'. This will keep the audiences attention with great effect. His authority over Ophelia is further enforced by the sheer amount of speech ordained to Laertes. Laertes also has a large amount of pauses throughout his dialogue 'Fear it, Ophelia, fear it, my dear...' relaying to the audience his passion for informing Ophelia and his strong beliefs in his take on the relationship between Ophelia and Hamlet. Shakespeare's use of characteristics of everyday talk create a dialogue between two characters which is emotive, thought-provoking and above all, due to the extracts position in the play, engaging for the audience. ?? ?? ?? ?? ...read more.