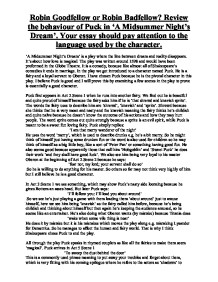 Robin Goodfellow or Robin Badfellow? Review the behaviour of Puck in 'A Midsummer Night's Dream'. Your essay should pay attention to the language used by the character.

Robin Goodfellow or Robin Badfellow? Review the behaviour of Puck in 'A Midsummer Night's Dream'. Your essay should pay attention to the language used by the character. 'A Midsummer Night's Dream' is a play where the line between dream and reality disappears. It's about how love is magical. The play was written around 1598 and would have been preformed in the Globe Theatre. It is a comedy, because like almost all of Shakespeare's comedies it ends in marriage. In the play we get introduced to a character named Puck. He is a fairy and a loyal servant to Oberon. I have chosen Puck because he is the pivotal character in this play. I believe Puck is good and I will prove this by examining a few scenes in the play to prove is essentially a good character. Puck first appears in Act 2 Scene 1 when he runs into another fairy. We find out he is boastful and quite proud of himself because the fairy asks him if he is 'that shrewd and knavish sprite'. ...read more.

We also see him being very loyal to his master Oberon at the beginning of Act 2 Scene 2 because he says: 'fear not, my lord; your servant shall do so' So he is willing to do anything for his master. So others so far may not think very highly of him but I still believe he is a good character. In Act 3 Scene 1 we see something, which may show Puck's nasty side looming because he gives Bottom an a***s head. But later Puck says: 'I'll follow you: I'll lead you about around' So we see he's just playing a game with them leading them 'about around' just to amuse himself, here we see him being 'knavish' as the fairy called him before, because he's being childish and thinking about himself but then again he's keeping the audience amused, so he seems like an entertainer. He's also doing what Oberon wants (by mistake) because Titania does 'wake when some vile thing is near' He does it by mistake but it is his mistakes which moves the play along e.g. ...read more.

So if they forgive him and if they 'be friends' then clap and give him 'your hands' and 'Robin shall restore amends' as in fix any problems. I think this speech is very important because we see he is capable of being serious when the time comes but still some bits may come out a bit mocking and cocky to the audience, and as a child he is saying sorry about anything that may have offended anyone. So he is not as 'knavish' and 'shrewd' as the fairy previously thought. So from all of this I still have to say Puck is a good character. He sometimes seems like a child and comes off a bit mean, but all through the play he has an air of innocence surrounding him so he seems okay, which is what makes him a very interesting character. Also, if Puck was 'Robin Badfellow' than wouldn't have Shakespeare have named him that instead of 'Robin Goodfellow'? ...read more.