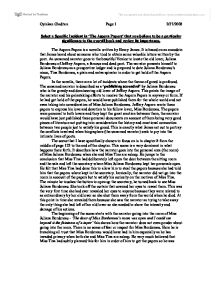 Select a Specific Incident in ‘The Aspern Papers’ that you believe to be a particular significance to the overall book and review its importance.

In the novella, there are a lot of incidents where the theme of greed is profound. The unnamed narrator is described as a ‘publishing scoundrel’ by Juliana Bordereau who is the greedy and domineering old lover of Jeffrey Aspern. This paints the image of the narrator and his painstaking efforts to receive the Aspern Papers in anyway or form. If he had got hold of the papers, he would have published them for the whole world and not even taking into consideration of Miss Juliana Bordereau. Jeffrey Aspern wrote these papers to express his love and devotion to his fellow lover, Miss Bordereau. The papers were personal to both lovers and they kept the great emotion between them, the narrator would have just published these personal documents on account of them being very good pieces of literature not putting into consideration the history and emotional connection between two people just to satisfy his greed. This is exactly what James set out to portray the conflicts involved when biographers (the unnamed narrator) seek to pry into the intimate lives of poets.

The scene that I have specifically chosen to focus on is in chapter 8 from the middle of page 123 to the end of the chapter. This scene is a very dominant in what happens there forth. It describes how the narrator goes into the personal area (the room) of Miss Juliana Bordereau when she and Miss Tina are asleep. He jumps to the conclusion that Miss Tina had deliberately left open the door between the sitting room and the sala and left the secretary where Miss Juliana Bordereau kept her personals open. He felt that Miss Tina had done this to allow him to steal the papers because she had told him that the papers where kept in the secretary. Ironically, the narrator did not go into the room in account of the papers but to satisfy his curiosity on the motives of Miss Tina. The minute he touches the button to open up the secretary, he turned back to see Miss Juliana Bordereau. She took off the curtain that covered her eyes to reveal them. This was the very first time she had ever revealed her eyes to anyone because they were related to as extraordinary by her old lover so she shut them away from the world when he died. At this point in time she revealed them because she saw the narrator as trying to take away the only thing she had left of her old lover so she needed to show the intensity and damage of his actions.

The beginning of the scene starts with the narrator going into the room of Miss Juliana Bordereau - ‘The door of Miss Bordereau’s room was open and I could see beyond it the faintness of a taper’ this shows how the narrator does not even ponder about going into the room. There is no sense of fear or respect for Miss Bordereau. Here he is breaching all trust that Miss Bordereau would have had in him especially as he has invaded privacy when both she and Miss Tina are asleep. He very much believed that Miss Tina had subtly planned this for him in order of him to get the papers so he was expecting her to come into the room. At the beginning he was just expecting the meeting between him and Miss Tina but then thought that she might have been asleep so then in his thoughts: ‘I had no definite purpose, no bad intention, but felt myself held to the spot by an acute, though absurd, sense of opportunity’ he decided to use the opportunity to locate the papers but completely full of doubt and fear. He tried to dissuade himself from going towards the secretary to look for the papers: ‘Even had this tempted me I was confronted with the evident fact that Miss Bordereau didn’t leave her secretary, her cupboards and the drawers of her table gaping.’

He further battled his decisions on whether to pry into the secretary or retreat out of the room, but his curiosity caught hold of him and he decided to jump at the opportunity. As he started to approach the secretary, he began to think of why Miss Bordereau would have moved the papers from the green trunk where they were before to the secretary which was more exposed in a room where she could not mount guard. His mind kept racing as he was thinking about what he was doing and the excitement of getting the papers. Although, subconsciously he was curious about why Miss Bordereau would move them to a more unsafe place as if not to test and catch him in the act of stealing them in case she was suspecting his intentions.

He suspected Miss Tina of leading him to that moment as he saw the secretary left open without the key. This showed that it had been obviously unlocked purposely because the key was not there:

‘I caught a glimpse of the possibility that Miss Tina wished me really to understand. If she didn’t so wish me, if she wished me to keep away, why hadn’t she locked the door of communication between the sitting room and the sala? That would have been a definite sign that I was to leave them alone. If I didn’t leave them alone she meant me to come for a purpose…’

‘…She hadn’t left the key, but the lid would probably move if I touched the button.’

His curiosity finally took hold of him as he touched the button with his hand. Almost immediately, he saw Juliana standing at the doorway in her night dress watching him. Here we see that he has lost all respect for her as he calls her by her first name. This shows the transition in Juliana Bordereau as she has been finally broken from her secretive nature from his actions of trying to steal her precious letters. The most unbelievable thing happens here where Juliana reveals her eyes: ‘she lifted the everlasting curtain that covered half her face, and for the first, the last and only time I beheld her extraordinary eyes. They glared at me; they were like the sudden drench, for a caught burglar, of a flood of gaslight; they made me horribly ashamed.’ The anger and emotion felt by Miss Bordereau came out in her eyes and interpreted everything that she felt inside. They made the narrator feel ashamed and think of everything but his greed and it also expressed to him the importance of the intimacy and privacy in those papers.

The last words Miss Bordereau uttered before she collapsed unto Miss Tina were ‘Ah you publishing scoundrel!’ These words are very important because they were the very things that she tried to prevent by being so secretive about her love affair with Jeffrey Aspern. She felt they were personal and intimate between her and her dead lover and they reminded her of him. She felt they did not need to be shared with the rest of the world because they would not appreciate the significance of the emotions and heartfelt words in the papers.

The language used by Henry James in this scene is very proper reflecting on the type of characters, the plot and way the story was set. He uses these words to relate to what the narrator is feeling and expresses to the audience in a way in which one feels they are experiencing what is happening. The theme of greed seems to be felt by both the narrator and Miss Tina in this scene. We can see the eagerness of the narrator to get hold of the papers even though he battles his conscience on whether it is right to or not. This makes him seem very ruthless but James has a way of making the audience feel sorry for him as he goes through painstaking measures to get hold of the papers. Miss Tina is also seen as greedy because she deceives her Aunt in aid of the narrator. She uses the narrator as her escape from her Aunt’s secrecy as to get herself to the outside world as her Aunt held her back.

This scene is very important in the book because we get too see the narrator and Miss Bordereau differently. Throughout the book, we see the narrator as ever so eager to get hold of the papers without even thinking about it for a second. Although when he is trying to get the papers from the secretary, he is very anxious and starts to battle with his conscience on whether or not to invade the privacy and when he sees her eyes and the way she feels about what he has done he feels ashamed of his actions and finally thinks of someone but himself. Miss Bordereau is seen very differently as we see her finally broken from her restraint and revealing about having the papers. This scene also has an impact on Miss Tina because even though she wants more than anything to be free and in touch with the outside world, she still values her aunt and her love for those precious papers and how she wanted to keep them personal so she puts the feelings of her dead aunt over the greed of the narrator.