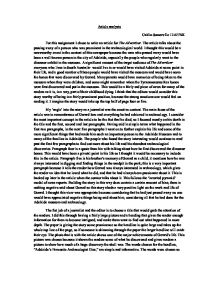 Article analysis Caitlin Somerville 12AF/NK For this assignment I chose to write an article for The Advertiser. The article talks about the passing away of a person who was prominent in the archaeological world. I thought this would be a newsworthy event in the context of this newspaper because the man who passed away would have been a well-known person in the city of Adelaide, especially the people who regularly went to the dinosaur exhibit in the museum. A significant amount of the target audience of The Advertiser- everyone who lives in South Australia- would live in or would have visited Adelaide at some point in their life, and a good number of these people would have visited the museum and would have seem the bones that were discovered by Gerard. Many parents would have memories of being taken to the museum when they were children, and some might remember when the Tyrannosaurus Rex bones were first discovered and put in the museum. ...read more.

very important paragraph because it tells the reader how Gerard was always interested in archaeology, which gives the reader an idea that he loved what he did, and that he had always been passionate about it. This is backed up later in the article when the curator talks about it. This follows the 'inverted pyramid' model of news reports. Building the story in this way does contain a certain amount of bias; there is nothing negative said about Gerard so this story sheds a very positive light on the work and life of Gerard. I thought this view was appropriate because considering that he had just passed away no one would have appreciated negative things being said about him, considering all that he had done for the Adelaide museum and archaeology. The fist job of a journalist and the editor is to choose a title that would grab the attention of the readers. I did this through having a fairly large picture and a heading that gives the reader enough information for them to become intrigued, and make them want to find out what happened in more depth. ...read more.

Everything that is said is quite factual and concise, nothing is exaggerated or over-dramatised because it is unnecessary in a story of this manner. The quotes were added to personalise the story, to make the readers' realise that he was a real person. Having his family members speak their memories gives the readers some insight to what sort of man he was and how sorely he will be missed. However, this article is still an emotive piece. It was written so that if someone read the first few paragraphs they would understand what had happened, and that if they chose to read on they would gain a deeper understanding of his impact in archaeology. The inclusion of quotes adds emotive content to the facts. Some phrases I use also try to affect the emotions of the readers for example "after a long battle with pancreatic cancer;" and "a terrible loss." This article has been written in a very simple way, the language used is very simple, and there is no exaggeration of any of the facts. It has been written simply to inform the general public of what happened to Gerard Iero. ...read more.