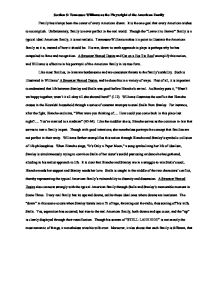 Tennessee Williams as the Playwright of the American Family.

Section 5: Tennessee Williams as the Playwright of the American Family Family has always been the center of every American dream. It is the one goal that every American wishes to accomplish. Unfortunately, family is never perfect in the real world. Though the "Leave it to Beaver" family is a typical ideal American family, it is not realistic. Tennessee Williams makes it a point to illustrate the American family as it is, instead of how it should be. His raw, down-to-earth approach to plays is perhaps why he has catapulted to fame and recognition. A Streetcar Named Desire and Cat on a Hot Tin Roof exemplify this notion, and Williams is effective in his portrayal of the American family in its true form. Like most families, in-laws are burdensome and are consistent threats to the family's stability. Such is illustrated in Williams' A Streetcar Named Desire, and he does this in a variety of ways. First of all, it is important to understand that life between Stanley and Stella was good before Blanche's arrival. As Stanley puts it, "Wasn't we happy together, wasn't it all okay till she showed here?" (112). Williams illustrates the conflict that Blanche causes in the Kowalski household through a series of constant attempts to steal Stella from Stanley. ...read more.

Indisputably, Tennessee Williams leaves no indication of describing the American family as it should be; rather, his portrayal of Stella and Stanley's relationship is a testament to the American family as it truly is. Tennessee Williams also succeeds in his portrayal of the American family in Cat on a Hot Tin Roof. The story itself engulfs the audience around the life of a family. Unlike the dream of a perfect family, the Pollitts are a family of psychological distress and tainted relationships. For example, audiences are perplexed at the character of Maggie, a self-described "cat on a hot tin roof" whose desire for her unloving husband torments her mind. Her painful craving for something she cannot have is certainly not found in an ideal family, for family should love one another. However, Williams is unmindful to this idea and parallels Maggie and Brick's relationship to the family whose love is unequal and unbalanced. In fact, the concept of unequal love is also illustrated in the relationship between Gooper and his parents. Highly unlikely is it ever found that parents divide their love equally among their children, and Williams conveys this point clearly. When Big Daddy is discussing to Brick all the lies he's lived, he exclaims, "Pretend to love that son of a b***h of a Gooper and his wife Mae and those five same screechers like parrots in a jungle? ...read more.

(80). Big Daddy reveals that he only pretends to like Big Mama and also, as stated earlier, that he only pretends to like Gooper and Mae and their children. Why? Because that is how a family should exist, with everyone loving each other. However, Big Daddy challenges this notion and declares his utter disgust at the lies with which he's lived. It can be assumed that Williams has expressed his emotions on the issue of family life through Big Daddy's outburst. Again, Cat on a Hot Tin Roof is in no means a story of idealistic relationships within a family, and again, the American family as it truly exists is accurately portrayed in this play. There can be no dispute about it: Tennessee Williams is the playwright of the American family. As illustrated in A Streetcar Named Desire and Cat on a Hot Tin Roof, the relationships between members of the family are not as perfect as one may hope to be. Realistic elements drawn from the actual world are obviously included in the writing of these plays, and undoubtedly, they accentuate the true-to-life settings reflected by the Kowalski and Pollitt families. So, what is the American family? Is it one that parallels the perfect world of "Leave it to Beaver? Or is it one that parallels the world in which it actually exists? Tennessee Williams leaves no doubt that he agrees with the latter. ...read more.