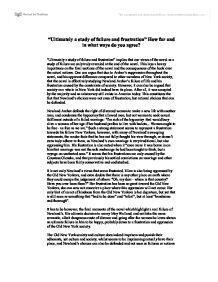 The Age of Innocence - Ultimately a study of failure and frustration

"Ultimately a study of failure and frustration" How far and in what ways do you agree? "Ultimately a study of failure and frustration" implies that our views of the novel as a study of failure are only truly revealed at the end of the novel. This lays a heavy importance on the final sections of the novel and the consequences of the book over the actual actions. One can argue that due to Archer's suppression throughout the novel, and his apparent difference compared to other members of New York society, that the novel is effectively studying Newland Archer's failure of life and his frustration caused by the constraints of society. However, it can also be argued that society as a whole in New York did indeed have its place. After all, it was accepted by the majority and an aristocracy still exists in America today. This constitutes the fact that Newland's choices were not ones of frustration, but rational choices that can be defended. ...read more.

It is not only Newland's views that seem frustrated. Ellen is also being oppressed by the Old New Yorkers, and even doubts that there is any other place on earth where they could escape the judgement of others: "Oh, my dear - where is that country? Have you ever been there?" Her frustration has been so great toward the Old New Yorkers, she can now not conceive a place where this oppression will not occur. Her only hint of an act of kindness from the Old New Yorkers is her departure, but yet that is still seen as something that "had to be done" and "tribal", but at least "handsome and thorough". It has to be however, the final moments of the novel which highlight a real failure of Newland's. His ultimate decision to marry May Welland, and not take the more romantic, albeit dangerous route of divorce and going after the women he loves shows an ultimate failure in him to be happy, probably down to a frustration and oppression of the Old New York society. ...read more.

They also never seem to question "the propriety of Madame Olenska's conduct", or the "completeness of Archer's domestic felicity." This could mean a society which silently monitors life, and is used as a force for good, and a source of wisdom. However, in reality, what Wharton seems to be hinting at is a controlling organization which never questions, simply because the answers are ones that they do not wish to know. This shows a frustration that must be felt by the more liberal characters within the novel as these oppressive features of the Old New York society are prevalent throughout the novel. 'The Age of Innocence' is a novel of failure and frustration. The actions of Newland Archer are not actions that one would take out of choice or in normal circumstances. The liberal, young New Yorkers who wish to break away from the stagnating views of the aristocracy are constantly caused to fail by the prevailing forces of the Old New York society. This leads to a frustration which is evident in many of the main characters who are bogged down by tradition and culture. ...read more.