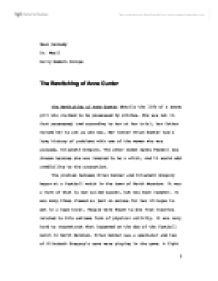 The Bewitching of Anne Gunter

Sean Kennedy Dr. Weoll Early Modern Europe The Bewitching of Anne Gunter The Bewitching of Anne Gunter details the life of a young girl who claimed to be possessed by witches. She was not in fact possessed, and according to her at her trial, her father forced her to act as she was. Her father Brian Gunter had a long history of problems with one of the women who was accused, Elizabeth Gregory. The other women Agnes Pepwell was chosen because she was rumored to be a witch, and it would add credibility to the accusation. The problem between Brian Gunter and Elizabeth Gregory began at a football match in the town of North Moreton. It was a form of what is now called soccer, but was much rougher. It was many times viewed as just an excuse for two villages to get in a huge brawl. People were known to die from injuries related to this extreme form of physical activity. It was very hard to reconstruct what happened on the day of the football match in North Moreton. Brian Gunter was a spectator and two of Elizabeth Gregory's sons were playing in the game. A fight broke out between two men, one of them a Gregory. Gunter got in the middle of it and tried to break it up, at this point Richard Gregory and his brother John turned on Gunter. ...read more.

This helped fro awhile, but Anne became bewitched again and the symptoms started up again. The family also tried a number of remedies that were popular at the time. The family burned Elizabeth Gregory's hair in an attempt to help Anne recover, also moving her to different places, but nothing provided permanent relief. It is hard to give one reason why witchcraft became so prevalent during this time period. Reasons that have been given are the reformation, and Catholics trying to counter that reformation. It can also be seen as Christianity still trying to root out traditional beliefs of people, which included magic and mysticism. It was also not like society just had witchcraft, as a strange belief. It was part of a much wider belief in ghosts, fairies, fortune telling and astrology. The reformation had helped create a new focus on the devil and all his works and this also added to the witchcraft craze. It is also amazing how people of the time would go along with the person being a witch. They in turn would make up things about the accused witch, like they say Agnes Pepwell turn a cat into a black rat. Witchcraft gave people the ability to blame things on other people and to harm them considerably. It can be compared to being accused of r**e, even if you didn't do it and are proved innocent, you will still have that stigma attached to you. ...read more.

He then used historical background to help put everything together for the reader. What the village was like, the population and how trials were done. The book showed how easily people could be accused of witchcraft and it also shows the mob mentality that existed in this time period. One thing that is really disturbing is the lack of conscience shown by people. The people who accused the women of witchcraft, obviously new it wasn't true, yet Anne Gunter showed no remorse for putting these women through this harrowing experience. Her only concern when confessing was of her own pain. One of the problems with this book is the fact that the historian many times did not have much to work with. He in turn would interpret a document to the best of his ability. Many times this would end up being a conjecture, and not a sure fact. History many times has to be looked at like that, but many of his inferences may have been off. There was almost a shadow of doubt over every part of the book. One thing that is interesting is that how high profile this case was. The King became involved, and the case received a lot of attention. That shows that even with all the publicity how hard it was to reconstruct this case. It would be even harder to ever show what happened in other cases, with less prominent members of society involved. ?? ?? ?? ?? 1 ...read more.