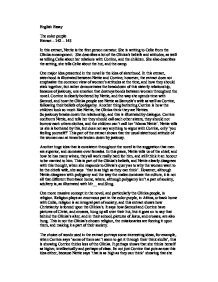 English Essay The color purple Extract - 142 - 143 In this extract, Nettie is the first person narrator. She is writing to Celie from the Olinka encampment. She describes a lot of the Olinka's beliefs and attitudes, as well as telling Celie about her relations with Corrine, and the children. She also describes the setting, she tells Celie about the hut, and the camp. One major idea presented in the novel is the idea of sisterhood. In this extract, sisterhood is illustrated between Nettie and Corrine; however, the extract does not emphasize the common view of women's attitudes at the time, and how they should stick together, but rather demonstrates the breakdown of this sisterly relationship, because of jealousy, one emotion that destroys bonds between women throughout the novel. Corrine is clearly bothered by Nettie, and the way she spends time with Samuel, and how the Olinka people see Nettie as Samuels's wife as well as Corrine, following their beliefs of polygamy. Another thing bothering Corrine is how the children look so much like Nettie, the Olinka think they are Netties. So jealousy breaks down the relationship, and this is illustrated by dialogue. ...read more.

This is not the Olinka's chosen religion, the missionaries are forcing it upon them, and making it a part of their society. The choice of words used in the extract portrays some interesting ideas, for example, when Corrine says 'some of them can't seem to get it through their think skulls', this is showing Corrine thinks less of the Olinka. It perhaps shows that she thinks herself as higher, intellectually and perhaps of class. Its not just Corrine that puts across this idea either, because Nettie says 'that is as high as they can think' showing that she also believes that she is a higher class from the Olinkas, and that she is intellectually better then them. Furthermore, Nettie says to Olivia that she will grow up to be a nurse or a teacher. This illustrates the attitude of Nettie, that she will want Olivia to do well, and make something of herself, unlike the Olinka people, whose greatest aspiration is to be the wife of the chief. However, it also compares the change of time, not just between the scarlet letter but even more recently, between what life was like for women back home in America. ...read more.

On the whole though, sisterhood is a very important aspect in the color purple. Male domination is another key feature of the book. Polygamy is allowed in the Olinka tribe, however, back in America, even though polygamy isn't allowed, the men still have all the power. An example is when Mr__ is married to Celie and he cheats on her a lot with Shug. The shocking thing is, Celie doesn't even mind! One more example of disrespecting women, like the Olinkas, is when Pa rapes Celie, and tries to r**e Nettie, even though he had a wife. So although polygamy isn't technically allowed, adultery is still present. Religion is another feature throughout the novel, and we can see this right from the start, because all the letters are entitled - dear god. We can tell Celie is obviously very religious, and believes strongly in Christianity, but later in the novel, Shug makes her question Christianity, or rather; the white mans interpretation of Christianity. Shug questions Gods existence, not entirely, just as what the majority of people perceive it to be: a white old man with a beard. So we can see from this the white peoples beliefs and views have been forced upon Celie, much like they have been forced upon the Olinka. ...read more.

*** 3 stars
This essay shows an understanding and knowledge of the themes in 'The Color Purple'. There are some well selected quotes but more are needed particularly towards the end of the essay.
More language analysis is needed and the essay needs to be more logically structured, including a conclusion.