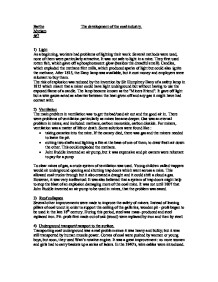 The development of the coal industry

Barthe The development of the coal industry. Myriam 4�7 1) Light As a beginning, workers had problems of lighting their work. Several methods were used, none of them were particularly attractive. It was not safe to light in a mine. They first used rotten fish, which gave off a phosphorescent glow (besides the dreadful smell). Candles, which exploded the methane flint mills, which produced sparks of light but could also ignite the methane. After 1815, the Davy lamp was available, but it cost money and employers were reluctant to buy them. The risk of explosion was reduced by the invention by Sir Humphrey Davy of a safety lamp in 1815 which meant that a miner could have light underground but without having to use the exposed flame of a candle. ...read more.

This could exploded the methane. * John Buddle invented an air pump, but it was expensive and pit owners were reluctant to pay for a pump To clear mines of gas, a crude system of ventilation was used. Young children called trappers would sit underground opening and shutting trap doors which went across a mine. This allowed coal trucks through but it also created a draught and it could shift a cloud a gas. However, it was very ineffectual. It was also believed that a system of trap doors might help to stop the blast of an explosion damaging more of the coal mine. It was not until 1807 that John Buddle invented an air pump to be used in mines, that the problem was eased. ...read more.

The increase in the production of coal and manufactured goods created transport problems in Britain. Most of Britain's roads were dirt tracks, which were very dangerous in bad weather and expensive. After 1759 canals were built across Britain to help ease these problems. The Bridgewater Canal linked Manchester with the Duke of Bridgewater's coal mines at Worsley. When the canal opened in 1761 it was a great success. Coal production from the mines increased and the price of coal, which was used as fuel, fell by 50% overnight in Manchester. Canals were used to transport coal, food, building materials and cotton. 4) Flooding Even with Watt's improved steam engine, flooding was a real problem in mine. Flooding was a risk that was out of the control of the miners as even Watts steam engines could not cope if a mine had a serious flood. Likewise, pit props could only take a certain amount of strain. ...read more.