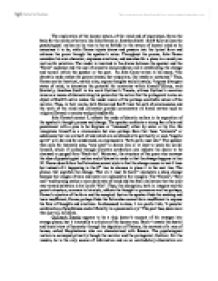 The exploration of the human nature, of the mind and of experience, forms the basis for the works of writers like John Donne or Jonathan Swift.

The exploration of the human nature, of the mind and of experience, forms the basis for the works of writers like John Donne or Jonathan Swift. Swift fully utilizes the psychological realism as he tries to be as faithful to the nature of human mind as he conceives it to be, while Donne injects drama and passion into the lyrical form and enlivens the poem through the speaker's voice. Throughout his poems, John Donne considers his own character, expresses emotions, and searches for a place in a society as well as for salvation. The reader is involved in the drama between the speaker and the "blank" audience and the use of conceits and paradoxes aid in establishing the change and turmoil within the speaker or the poet. As John Carey writes in his essay, "this dramatic mode makes the poems intense, but temporary, like masks or costumes." Thus, Donne can be theatrical, switch roles, expose thoughts and ultimately, "express divergent states of mind, to dramatize the potential for contraries within himself."(Carey, xxv) Similarly, Jonathan Swift in his work Gulliver's Travels, utilizes Gulliver's narrative voice as a means of characterizing his person but the notion that the protagonist is also an object of Swift's satire makes the reader aware of the perhaps unreliable nature of the narrator. ...read more.

Just as the speaker finds the washing and tears insufficient, Donne perhaps finds the Petrarchan sonnet form insufficient to express his flow of thoughts and emotions. As discussed in class, it is a poetic trick, "a peculiar combination of playfulness and artificiality in a passionate cry." The poet thus, does more than just tell, he shows. Gulliver's Travels appears to be a ship doctor's account of his voyages into strange places, but it is actually a criticism of the human race. Book 4 reveals the bestial and brutal view of humanity through the depiction of Yahoos, the servants of a race of horses, called Houyhnhnms who are characterized with Reason. The psychological realism is conveyed primarily though the narrator and the protagonist, Gulliver. For the readers, he is the only source of information and as no contradictory observation are offered, at first it is difficult for the reader to choose a particular attitude. Although the ending and Gulliver's choice of lifestyle may appear ridiculous or on verge of insanity, it is still moving and effective. Gulliver, has undergone a transformation from a proud Englishmen to a man ashamed of the entire species to which he belongs. ...read more.

because the Yahoos, too, are exaggerations. Just as life of pure reason is inadequate so is the life of pure emotion. Moreover, in the last chapters, Gulliver's behaviour and acts such as buying the stallions and talking to them for hours in the language of Houyhnhnms, or making his wife seat at the far end of the table, are illogical and bizarre. Thus, all the experience he has gone through and the possible understanding, can not be taken very seriously because the narrator who tells us the story lacks critical judgement in a sense that he fails to see his own inconsistencies and flows. This is what makes the novel a satirical one, because as discussed in class, Swift has created a gap between the story itself and the voice telling the story. It is in the place of this gap that the reader enters and needs to make an evaluation. Despite his desire for privacy and the guarding of his poems, Donne appears concerned to involve the reader into the probing and surprising thought process that also perhaps reflects the uncertainty, passion and discovery of the Renaissance period. Thus, both Swift's use of narrative voice and Donne's dramatic mode have the effect of engaging the reader into the work and provoking his judgement. It is through this collaboration that the meaning is generated. ...read more.