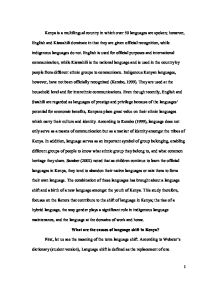 The language situation in Kenya, and in particular the shift and choice of English, Swahili, and the indigenous languages in various domains.

Kenya is a multilingual country in which over 50 languages are spoken; however, English and Kiswahili dominate in that they are given official recognition, while indigenous languages do not. English is used for official purposes and international communication, while Kiswahili is the national language and is used in the country by people from different ethnic groups to communicate. Indigenous Kenyan languages, however, have not been officially recognized (Kembo, 1999). They are used at the household level and for interethnic communications. Even though recently, English and Swahili are regarded as languages of prestige and privilege because of the languages' potential for economic benefits, Kenyans place great value on their ethnic languages which carry their culture and identity. According to Kembo (1999), language does not only serve as a means of communication but as a marker of identity amongst the tribes of Kenya. In addition, language serves as an important symbol of group belonging, enabling different groups of people to know what ethnic group they belong to, and what common heritage they share. Samber (2002) noted that as children continue to learn the official languages in Kenya, they tend to abandon their native languages or mix them to form their own language. The combination of these languages has brought about a language shift and a birth of a new language amongst the youth of Kenya. This study therefore, focuses on the factors that contribute to the shift of language in Kenya; the rise of a hybrid language, the way gender plays a significant role in indigenous language maintenance, and the language at the domains of work and home. ...read more.

With this situation, languages with majority speakers may be socially and economically more prestigious than those languages with few speakers. Inter-marriage between these majority speakers with minority speakers will eventually lead to the loss of the minority language with few speakers. This I can tell from my experience when I was back in Kenya. There was an ethnic community called Aasax, which has the least number of speakers and therefore was, considered as economically inferior. Marriage between them and the Maasai was discouraged. However, Maasai men did marry Aasax women while Aasax men could marry Maasai girls in return for doing herdsman's services. Due to this intermarriage the Aasax language deteriorated, since they were most likely to use Maasai language which was economically more powerful than theirs. Even though, they still use their native language, in the long run Aasax language would eventually fall into non-existence in the lives of the new families. This is a good example of language shift in that the language used by Aasax community is no longer used when they marry from a different ethnic group. It also points inter-marriage and gender relations as key factors in vernacular language shift and loss. Effects of gender and interethnic marriages on language shift and maintenance. From my experience, Indigenous languages are most often maintained in family domains. This is evidenced by the traditional role of women in Kenya, especially in Maasai community; whereby they are kept out of inter ethnic interaction at the social level. ...read more.

Where the field is likely to head As per my experience, languages in Kenya, especially the indigenous languages are facing a threat, and not only from the official languages, English and Swahili, but also from the hybridization of many vernacular languages. However, the official languages are also affected. This is a result of the mixed languages used by individuals, which affects their competence in both English and Swahili. Researchers and linguist like Rhodes, Whiteley and Samber agree that both formal and informal education can play an important role in reversing language shift. They claims that, if parents could involve their children in cultural activities that put the children in an immersion experience of their heritage culture, it would prevent the replacement of indigenous languages, and hence, cohabit with English and Swahili for a better interaction both within the country and all over the world. Conclusion This study looked at the language situation in Kenya, and in particular the shift and choice of English, Swahili, and the indigenous languages in various domains. English has gradually become a lingua franca among the educated Kenyans living in urban areas, and a language that some Kenyans use in their homes, where traditional indigenous languages normally dominate. On the other hand, Kiswahili is the intra-ethnic lingua franca, and the national language. The standard form is taught at school while the non-standard form is increasingly becoming the first language of Kenyan urban children. Education, rural-urban migration, increased inter-ethnic interaction and inter-ethnic marriages, are among the factors that are causing language shift in the home domains. ...read more.