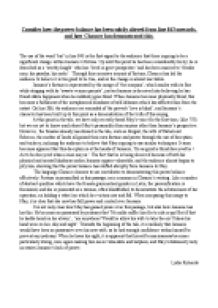 The Merchant's Tale. Consider how the power balance has been subtly altered from line 843 onwards, and how Chaucer has demonstrated this.

﻿Consider how the power balance has been subtly altered from line 843 onwards, and how Chaucer has demonstrated this. The use of the word ?but? in line 843 is the first signal to the audience that there is going to be a significant change within Januarie?s fortune. Up until this point he has been considerably lucky; he is described as a ?worthy knight? who has ?lived in greet prosperitee? and has been married to ?fresshe may, his paradys, his make?. Through this excessive amount of fortune, Chaucer has led the audience to believe it is too good to be true, and so the change is almost inevitable. Januarie?s fortune is represented by the image of ?the scorpion?, which smiles with its face while stinging with its ?sweete venym queynte?, just as Januarie is deceived into believing he has found stable happiness when he suddenly goes blind. ...read more.

At this point in the tale, we have only recently heard May?s voice for the first time, (like 770) but we are yet to know much about May?s personality from anyone other than Januarie?s perspective. However, the females already mentioned in the tale, such as Abigail, the wife of Nabal and Rebecca, the mother of Jacob all gained their own fortune and power through the use of deception and trickery, inclining the audience to believe that May is going to use similar techniques. It soon becomes apparent that this deception is at the hands of Januarie, ?for as good is blind deceyved be / As to be deceyved whan a man may se?. The fact that he is being deceived because of both his physical and mental blindness makes Januarie appear vulnerable, and the audience almost begins to pity him, showing that the power balance has shifted abruptly from Januarie to May. ...read more.

When comparing this image to May, it is clear that she now has full power and control over Januarie. It is not only clear how May has gained power over this passage, but also how Januarie has lost his. He becomes so possessed by jealousy that "He nolde suffre hire for to ride or go/ But if that he hadde hond on her alway? , ?nor anywhere/ Would he allow his wife to take the air/ Unless his hand were on her, day and night?. Towards the beginning of the tale, it is unlikely that Januarie would have been so possessive over his new wife, as he had enough confidence within himself to prevent any jealousy. When he loses his sight, it is apparent that his self-consciousness becomes particularly strong, once again making him seem vulnerable and helpless, and May?s dishonesty only increases Januarie?s lack of power. Lydia Richards ...read more.