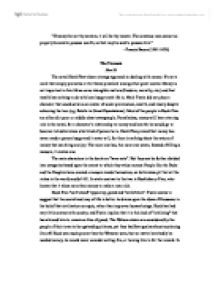 The novel Huck Finn takes a strange approach to dealing with money.

"If money be not thy servant, it will be thy master. The covetous man cannot so properly be said to possess wealth, as that may be said to possess him." --Francis Bacon (1561-1626) The Vacuum Nan Ni The novel Huck Finn takes a strange approach to dealing with money. It's not a work that simply promotes a trite theme prevalent among other great novels: Money is not important in this life as some intangible matters (freedom, morality, etc.) and that wealth has nothing to do with how happy one's life is. Mark Twain did not place a character that could serve as an avatar of social prominence, wealth, and misery despite achieving the two (e.g. Estella in Great Expectations). Most of the people in Huck Finn are either dirt poor or middle class townspeople. Nonetheless, money still has a starring role in the novel, for a character's relationship to money and how far he would go to become rich determines what kind of person he is. Huck Finn proved that money has never made a person happy and it never will, for there is nothing about the nature of money that can bring one joy. ...read more.

However, their image as compassionate, charitable old ladies is marred when Miss Watson decided to sell Jim down to New Orleans, and the widow agreed to let her. Since they had no reservations about tearing a man from his family for a few hundred dollars, they are obviously not the "good Christians" that they proclaim to be at heart. However, the sisters were partially redeemed when Miss Watson set Jim free in her will: one would have a hard time imagining such and action coming from the Duke or the Dauphin. Therefore, the Watson sisters are several tiers above them, and can be regarded as examples of the typical person, who is basically good at the core, but who cannot perceive and amend the ethical shortcomings of a defective society. Another person in the novel who is rather fond of money, but has a good heart despite his desire for capital, is Jim. He exhibited something akin to avarice when, near the beginning of the novel, he asked Huck to pay his hairball a quarter in order for it to reveal Huck's future. ...read more.

He will no longer be capable of enjoying life, for he will have lost all respect for all of humanity, which includes himself. Even if the Duke and the Dauphin had become rich, they could never be happy for they cannot enjoy any of the things that make life worth living (e.g. love, friendship, etc.). All in all, the simplest moral of the book may be that money corrupts. People like the Duke and the Dauphin have become possessed by their desire for money. The void hole inside of them was carved out by their voracity and it has replaced their heart, soul and character. Like a black hole, it sucks in everything that enters, yet can never be full. Therefore, despite their success at trickery, the Duke and the Dauphin will never be as truly rich of a person as Huck Finn is. When the pair of swindlers are tarred, feathered and driven from town "astraddle of a rail", the readers realizes that the pursuit of money cannot lead one to a good end. The theme of money was threaded throughout the novel not only to convey a moral to its audience, but also to highlight the differences between the characters: it revealed how deeply the root of all evil had taken root in each man's heart. ...read more.