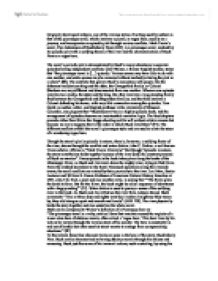 Originally developed in Spain, one of the various styles of writing used by authors is that of the picaresque novel, which involves a picaro, or rogue hero, usually on a journey, and incorporates an episodic plot through various conflicts. Mark Twain's novel, The Adventures of Huckleberry Finn (AHF), is a picaresque novel, marked by its episodic plot with a unifying theme of the river and the characterization of Huck Finn as a rogue hero. The novel's periodic plot is demonstrated by Huck's many adventures in separate episodes having independent conflicts. Gary Weiner, a former English teacher, states that "the picaresque novel is [...] episodic. Various scenes may have little to do with one another, and entire scenes may be removed without markedly altering the plot as a whole" (88). The conflicts that govern Huck's encounters with people like the dishonest and devious king and the duke, the Grangerford family, or Colonel Sherburn are very different and disconnected from one another. Whereas one episode involves two crooks, the duke and the king, the other involves a long-standing family feud between the Grangerford and Sheperdson families, and the third involves a Colonel defending his honor, with very little connection among the episodes. Tom Quirk, an author, editor, and English professor at the University of Missouri-Columbia, also purports that "Huckleberry Finn is a highly episodic book, and the arrangement of episodes observes no incontestable narrative logic. ...read more.

Thus, Huck demonstrates the characteristic of being a rogue hero through his immoral actions and their justification. Rogue heroes travel 'through' various social strata; through the episodes that Huck experiences, Twain presents the many levels of antebellum Mississippi valley American social strata. Huck starts traveling with Jim, a runaway slave, down the Mississippi river, and eventually befriends him, a lower class individual. Huck, after playing a cruel joke on Jim, apologizes to him. This is highly out of convention for the milieu of the time, as Jim is naught more than a slave, while Huck is a white boy: "It was fifteen minutes before I could work myself up to go and humble myself to a nigger - but I done it, and I warn't sorry for it afterwards, neither" (AHF 98). This exemplifies one instance where Huck mingles with a person of a lower class. Additionally, Huck cares enough about Jim that he resolves himself to free his friend and suffer the consequences: "I studied a minute [...] then says to myself, 'All right. Then, I'll go to hell' [...] I would go to work and steal Jim out of slavery again [...]" (AHF 228). Huck sacrifices the most valuable part of himself, his soul, to stay with his lower class friend Jim. Huck also interacts with people of higher social classes: "Tom Sawyer, his aunt, the Widow Douglas, and Miss Watson are all drawn from the middle class. ...read more.

Similarly, when Jim is in danger of being discovered by raftsmen, he quickly lies to them and convinces them that his father has smallpox: "'[...] gentlemen, if you'll only pull ahead, and let me heave you the head-line, you won't have to come a-near the raft;'" the men immediately back off: "'Keep away, boy - keep to looard. [...] Your pap's got the smallpox and you know it precious well. [...] Do you want to spread it al over?'" (AHF 103). Huck lies again to protect himself as well as Jim. In addition, he uses his practical knowledge to support his story when he is cornered by Mrs. Judith Loftus. To see if Huck was really from a farm, as he had told her while in the guise of a girl, she asks him questions, such as "'Which side of a tree does the most moss grow on?'" to which Huck promptly and correctly answers "'North side;'" Huck's practical knowledge convinces her, as she responds, "'Well, I reckon you have lived in the country,'" and relieves Huck of momentary trouble (AHF 71). Quickly concocting stories and lies as well as utilizing practical knowledge characterize Huck's wit, fulfilling this criterion of the rogue hero. An episodic plot and Huck Finn as a rogue hero establish Mark Twain's The Adventures of Huckleberry Finn as a picaresque novel. The plot consists of many episodes with separate and disconnected conflicts, all bound by the river. Huck Finn can be characterized as a rogue hero, thus fulfilling all the necessary criteria for the picaresque novel. ?? ?? ?? ?? ...read more.