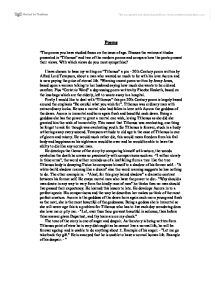 The poems you have studied focus on the issue of age. Discuss the various attitudes presented in &amp;#147;Tithonus&amp;#148; and two of the modern poems and compare how the poets present their views. With which views do you most sympathise?

Poems "The poems you have studied focus on the issue of age. Discuss the various attitudes presented in "Tithonus" and two of the modern poems and compare how the poets present their views. With which views do you most sympathise? I have chosen to base my writing on "Tithonus" a pre - 20th Century poem written by Alfred Lord Tennyson, about a man who wanted so much to be with his love Aurora and is now paying the price of eternal life. "Warning recent poem written by Jenny Jones, based upon a woman talking to her husband saying how much she wants to be old and carefree. ...read more.

So Tithonus is forever, stuck in a body withering away every second. Tennyson attitude to old age in the case of Tithonus is one of gloom and misery. He would much rather die, this would mean freedom from his frail body and happiness as his nightmare would be over and he would be able to have the ability to die like any normal man. He develops the theme of the story by comparing himself with nature, the woods symbolise the death he craves so passionatly with comparrisons such as: -"I wither slowly in thine arms", the word wither reminds us of a leaf falling from a tree like the tree Tithonus body is decaying.Twice he compares himself to a shadow of his former self: - "A white-hair'd shadow roaming like a dream" also the word roaming suggests he has nothing to do. ...read more.

Being a godess she is immortal so she will never age this is a problem for Tithonus who has to live each day wondering does she love me or pity me: - "Lo!, ever thus thou growest beautiful in scilence, then before thine answer given Departest, and thy tears are on my cheek." The tone of the story is one of anger and despair. As the story is being written from Tithonus point of view he is very distrought as he cannot live a normal life, he will be forever ageing and is unable to do anything about it. Example of his anger: - "Let me go take back thy gift." He is annoyed that he is unable to have a normal human life. Example of his despair: - " ...read more.