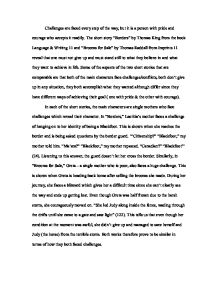 The short story &quot;Borders&quot; by Thomas King from the book Language &amp; Writing 11 and &quot;Brooms for Sale&quot; by Thomas Raddall from Imprints 11 reveal that one must not give up and must stand still

Challenges are faced every step of the way, but it is a person with pride and courage who accepts it readily. The short story "Borders" by Thomas King from the book Language & Writing 11 and "Brooms for Sale" by Thomas Raddall from Imprints 11 reveal that one must not give up and must stand still to what they believe in and what they want to achieve in life. Some of the aspects of the two short stories that are comparable are that both of the main characters face challenges/conflicts, both don't give up in any situation, they both accomplish what they wanted although differ since they have different ways of achieving their goal ( one with pride & the other with courage). In each of the short stories, the main characters are single mothers who face challenges which reveal their character. In "Borders," Laetitia's mother faces a challenge of hanging on to her identity of being a Blackfoot. ...read more.

Both works therefore prove to be similar in terms of how they both faced challenges. Likewise, both characters don't give up and bravely respond back to the challenges they faced. Laetitia's mom doesn't give up of declaring that she is a Blackfoot even after she knew that the border guards wanted an answer of either Canadian or American. This gave her a lot of hassle of going from the border to the border office and vice versa. "In the end, she told us that if my mother didn't declare her citizenship, we would have to go back to where we came from" (25). This shows that she knew what she was going to face if she were to stick to her stubbornness; but she moved on with her pride and didn't give up. She spent her night near the duty-free shop and next morning the media arrived and asked them all sorts of questions. ...read more.

What pain she suffered, you can guess" (118). This shows that even though she is suffering through a lot of pain, she keeps going on and doesn't give up. Another example that shows Greta doesn't give up is when she is heading back home after selling the brooms she made. It was a chilly February, as she was coming back home she faced a blizzard and couldn't see the way clearly. Although, "Greta was not afraid" (119) and moved on with her horse Judy. She stopped at an unfamiliar place and came to know that she was lost all the time. At a point she did feel like giving up but "whenever Greta's eyes closed, and the strength seemed to flow out of her limbs, there came into her mind a picture of the lonely boy at the neighbours' house, with his nose against the glass. She opened her eyes then, and stepped forward strongly in the darkness" (121). Greta's courage gave her the strength to move forward which saved her life since she could have frozen to death if she gave up. Therefore, proving the similarities between the two short stories. ...read more.