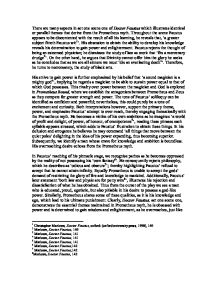 There are many aspects in act one scene one of Doctor Faustus which illustrates identical or parallel themes that derive from the Prometheus myth. Throughout the scene Faustus appears to be discontented

There are many aspects in act one scene one of Doctor Faustus which illustrates identical or parallel themes that derive from the Prometheus myth. Throughout the scene Faustus appears to be discontented with the result of all his learning, he reveals that, 'a greater subject fitteth Faustus wit1'. His obsession to obtain the ability to develop his knowledge reveals his determination to gain power and enlightenment. Faustus rejects the thought of being an esteemed physician; he dismisses the study of law as work that 'fits a mercenary drudge2'. On the other hand, he argues that Divinity cannot offer him the glory he seeks as he concludes that as we are all sinners we must 'die an everlasting death3'. Therefore, he turns to necromancy, the study of black arts. His strive to gain power is further emphasized by his belief that 'a sound magician is a mighty god4', implying he regards a magician to be able to sustain power equal to that of which God possesses. This rivalry over power between the magician and God is explored in Prometheus Bound, where we establish the antagonism between Prometheus and Zeus as they compete for greater strength and power. ...read more.

Additionally, Faustus' later statement 'both law and physic are for petty wits8', illustrates his rejection and dissatisfaction of what he has obtained. Thus from the outset of the play we see a man who is educated, proud, egotistic, but also pitiable in his desire to possess a god-like power. Similarly, Prometheus shares some of these qualities, as it is his knowledge and ego, which lead to his ultimate punishment. Clearly, Doctor Faustus, act one scene one, demonstrates the essential themes maintained in Prometheus myth, he is obsessed with power and is determined to gain wisdom and enlightenment, as he overreaches, just like Prometheus. Consequently, our central characters both share comparable weaknesses, which we discover through their pride and ego. Moreover, fate is another crucial factor explored in Greek tragedies. The Prometheus myth offers one extended Scene of Suffering, which is apparent as Prometheus is literally chained by his fate. Similarly, this is explored in Doctor Faustus as Marlowe presents the struggle with religion throughout, which inevitably leads to his ultimate deterioration and damnation by his descending to hell. Faustus' speech offers a tone of helplessness and sourness as he quotes from Romans 6.23, 'the reward of sin is death. ...read more.

Though it is not until act five, scene two, where we establish the deep distress and anguish experienced by Faustus, act one, scene one, also offers a struggle within Faustus' identity as he battles with his individuality and beliefs. The illustration of the good and evil angels may be a personification of the conflict and choices that continue to face Faustus. Their opposing views represent Faustus' confusion, and in turn highlight his suffering within the opening of the play. Hence, it is evident that the text engages with the Prometheus myth as it demonstrates aspects of torture and damnation, which are apparent in Prometheus bound. In conclusion, although Doctor Faustus contains a different setting and a contrasting society from what we are familiar with in Prometheus myth, we can still discern similarities as well as conflicts between the Christian worldviews and the Greek or renaissance worldviews, which becomes explicit by the identical themes between them. The reference to Icarus foreshadows Faustus' fate as he endeavours to gain knowledge, his overreaching desire parallels the Prometheus myth, hence, it is no surprise to find that Prometheus' suffering is re-established in Faustus' struggle. Moreover, the texts continue to engage thematically as we identify power, pride, and rebellion, in which our protagonists face. ...read more.