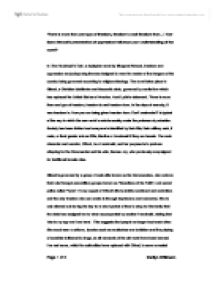 'There is more than one type of freedom, freedom to and freedom from...' How does Atwood's presentation of oppression influence your understanding of the novel?

'There is more than one type of freedom, freedom to and freedom from...' How does Atwood's presentation of oppression influence your understanding of the novel? In The Handmaid's Tale, a dystopian novel by Margaret Atwood, freedom and oppression are juxtaposing themes designed to warn the reader of the dangers of the country being governed according to religious ideology. The novel takes place in Gilead, a Christian totalitarian and theocratic state, governed by martial law which has replaced the United States of America. Aunt Lydia's statement, 'There is more than one type of freedom, freedom to and freedom from. In the days of anarchy, it was freedom to. Now you are being given freedom from. Don't underrate it' is typical of the way in which the new world controls society under the pretence of protection. Society has been divided and everyone is identified by their title, their military rank, if male, or their gender role as Wife, Martha or Handmaid if they are female. The main character and narrator, Offred, is a Handmaid, and her purpose is to produce offspring for the Commander and his wife, Serena Joy, who previously campaigned for traditional female roles. ...read more.

The Wall itself is described in a threatening and sinister manner, most notably the 'ugly new floodlights', 'barbed wire' and 'broken glass set in concrete' creating an oppressive atmosphere. The portrayal of the prisoners hung upon the wall is even more disturbing, as Offred likens them to 'snowmen, with the coal eyes and carrot noses cut out' and 'dolls on which faces have not yet been painted'. The childlike imagery is Offred's way of taming and understanding the disturbing scene. The women are made to observe executions, known as 'salvaging', which is ironic as the term is juxtaposed with the act, as another way of controlling them through fear. The 'particution' is another violent practice which involves the Handmaid's forming a circle around a former Guardian and alleged r****t, brutally attacking him until dead despite his protests that he is innocent. The Handmaids are likened to a 'crowd at a rock concert', suggesting that they are loud and uncontrollable and Offred disturbingly comments that 'we are permitted anything and this is freedom', as their s******c pleasure allows them to be further manipulated by the state. ...read more.

The freedoms the citizens of Gilead have are few but make their lives bearable. Offred comments that, for the Marthas, 'bits of petty gossip give them an opportunity for pride'. Her own experiences with the Commander and her relationship with Nick cause her to become so content that she has become 'lazy'. She says that, 'I have made a life for myself, of a sort' and remembers her mother's comment that 'humanity is so adaptable'. The presentation of oppression in The Handmaid's Tale influences the reader's understanding of the novel as it expresses what could happen if extreme religious ideology is followed as a solution to social problems. Atwood condemns not only the misogynistic ideas and religious fanaticism presented in the novel, but also the complacency of the women involved as they endure oppression without complaint provided that they receive some slight power or freedom. Offred's own mother states that it is 'truly amazing, what people can get used to, as long as there are a few compensations'. Many consider the novel to be a criticism of the Fundamentalist protestants in America as at the time of writing, during the Raegan era, political and religious conservatism was rising. Page 1 of 5 Marilyn Wilkinson ...read more.