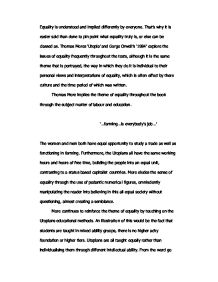 Equality is understood and implied differently by everyone. That's why it is easier said than done to pin point what equality truly is, or else can be classed as. Thomas Mores 'Utopia' and Gorge Orwell's '1984' explore the issues of equality frequently throughout the texts, although it is the same theme that is portrayed, the way in which they do it is individual to their personal views and interpretations of equality, which is often effect by there culture and the time period of which was written. Thomas More implies the theme of equality throughout the book through the subject matter of labour and education. '...farming...is everybody's job...' The women and men both have equal opportunity to study a trade as well as functioning in farming. Furthermore, the Utopians all have the same working hours and hours of free time, building the people into an equal unit, contrasting to a status based capitalist countries. More eludes the sense of equality through the use of pedantic numerical figures, omnisciently manipulating the reader into believing in this all equal society without questioning, almost creating a semblance. ...read more.

More successfully creates a constant feel for equality trough the repetition of plural pronouns; '...they all...everyone...' The connotation of the lexical choices used suggest of equality and collaboration. More never individualises anyone, an example of this would be the fact that during this passage Raphael never uses the names of the people this subliminally reinforces equality. Practicality is clearly an equal priority for the Utopians; '...essential to the public...' They only practice trades that are essential to survival their clothing is produced based on practicality in the work place as well as every day functioning although this way of life sounds lifeless and boring nether the less Raphael seems to enjoy it; '...these clothes are quite pleasant to look at...' Mores descriptive writing creates an image, a sea of people who are equal physically and mentally, the imagery produced create a feel of indoctrination the connotation of this passage, produced by the suggestive lexical choices suggest of a society were individually has disappeared so much so that even physically they are starting to look equal. ...read more.

at a faster pace therefore, making us feel emotionally equal to the characters because the read to feels the tension and rush they seem to feel in the book. Propaganda is introduced through the use of branding; '...victory mansion...' The mention of 'victory' items is a constant theme right the way through the book. The repetition and reinforcements of possessions such as 'victory gin' creates propaganda were the characters are equally subliminally manipulated. The characters are force to believe in the sense of winning there is no question of losing, they are so confident about the matter in hand. Furthermore this creates equality as they all have the same branding of products therefore know one can be classed as having a higher status or amount of wealth due to the branding they own. This has the same principles of why the utopians wear the same sort of clothing, also in 1984 they have to wear the same overalls, removing any individuality for society making all equal. This is a contrast to Orwell's society were certain branded items implied you may have more class. ...read more.