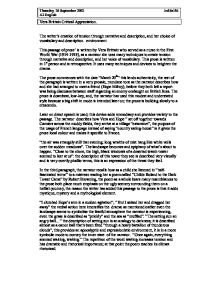 Thursday, 26 September 2002 Jad Salfiti A2 English Vera Brittain Critical Appreciation. The writer's creation of tension through narrative and description, and her choice of vocabulary and description. environment This passage of prose' is written by Vera Brittain who served as a nurse in the First World War (1914-1918), as a narrator she uses many techniques to create tension through narrative and description, and her voice of vocabulary. This prose is written in 1st person and is retrospective. It uses many techniques and devices to heighten the drama. The prose commences with the date "March 20th" this lends authenticity, the rest of the paragraph is written in a very prosaic, mundane tone as the narrator describes how and she had arranged to meet a friend (Hope Milroy), before they both left a report was being discusses between staff regarding an enemy onslaught on British lines. ...read more.

usage of French language instead of saying "country eating-house" is it gives the prose local colour and makes it specific to France. "the air was strangely still that evening; long wraiths of mist hang like white veils over the sodden meadows". The landscape becomes and epiphany of what's about to happen. "Close to the shore, the high, black windows of a deserted watch-tower seemed to leer at us": the description of this tower they see is described very visually and is very overtly phallic terms, this is an expression of the threat they feel. In the third paragraph, the narrator recalls how as a child she listened in "half- fascinated terror" to a mistress reading her a poem called "Childe Roland to the Dark Tower Came" by Robert Browning, the poem as a whole ...read more.

"The setting sun an angry ball..." the description of setting sun is an analogy to darkness; it is described almost as a canon ball that's been fired "through a heavy battalion of thunderous clouds", this provides an apocalyptic and expressionistic environment, it is in a more symbolic mode to convey the inner state of the narrator. "Once again, everything seemed waiting, waiting." The repetition of the word waiting increases tension and has dramatic and rhetorical importance; at that point the poem reaches its climax rhetorical. Much of the language within the poem is outdated "expostulated", "queer" and "whence" this helps the reader identify the era and shows the prose was written a long time ago. " and the great German offensive had begun" The prose ends ...read more.