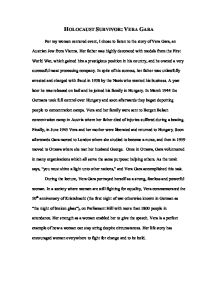 HOLOCAUST SURVIVOR: VERA GARA For my women centered event, I chose to listen to the story of Vera Gara, an Austrian Jew from Vienna. Her father was highly decorated with medals from the First World War, which gained him a prestigious position in his country, and he owned a very successful meat processing company. In spite of his success, her father was unlawfully arrested and charged with fraud in 1938 by the Nazis who wanted his business. A year later he was released on bail and he joined his family in Hungary. In March 1944 the Germans took full control over Hungary and soon afterwards they began deporting people to concentration camps. Vera and her family were sent to Bergen Belsen concentration camp in Austria where her father died of injuries suffered during a beating. Finally, in June 1945 Vera and her mother were liberated and returned to Hungary. Soon afterwards Gara moved to London where she studied to become a nurse, and then in 1959 moved to Ottawa where she met her husband George. Once in Ottawa, Gara volunteered in many organizations which all serve the same purpose: helping others. As the torah says, "you must shine a light unto other nations," and Vera Gara accomplished this task. ...read more.

Among fifty paintings listed one that stood out, The Scythe Sharpener, by Egger-Lienz. While Vera knew that everything else was gone she hoped that this painting could be traced and found. The Scythe Sharpener was found as a part of the Leopold collection, in Austria. The courts, in Austria, now have to decide if the painting once owned by Moritz Pick is the same one that is now part of the Leopold Collection. So far, the courts have ruled that there is not enough evidence to make a clear decision, and therefore the claims suit has been passed to a higher court. The fact that Vera omitted this story is shocking and confusing; it is another great story of strength and power of how she is rightfully reclaiming her past. Upon reflecting on Vera's speech, there are numerous connections between the readings and the lectures in relation to her speech. The first connection is on the power of language, which was studied in lecture number 7. Language enables people to express emotions, ideas, and experiences. People use language to give voice to their experiences and for those who have access to language have access to express them. Vera Gara showed her listeners that she has the ability to express herself and her experiences. ...read more.

The criticism towards this theory is that executing change is highly unlikely, as you need to work from within the system. In relation to Vera, she has gained admittance into this system and is able to execute change by reason of that. Her story demonstrates the possibility to bring change, even as women. Vera, being a part of a patriarchal society, has gained the respect of many honourable individuals, who allow her to run special events and organizations that aid in people's suffering. Vera is a true inspiration to women everywhere. Women have much to learn about strength from her experiences. Vera aims not only to educate people about her story, but she also wants to teach people how to be fearless and strong in obtaining their goals they want. After Vera finished speaking I approached her and told her how moved I was by her story. We discussed the connection we have as we are both Jewish and how my great grandmother is also a survivor. She told me she was touched to see a Jewish person come out and listen to another Jewish person's story, as the majority of the audience was obligated to attend for a religion's course. Vera and I exchanged e-mails and have been in touch. I am grateful to have met such a wonderful person. Holocaust Speaker: Vera Gara By: Jordana Stein Student #: 100622158 Course: Women Studies 1808A TA: Tanya Watkins Due: Tuesday. November 25 in tutorial ...read more.