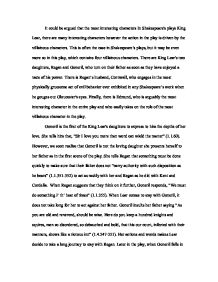 It could be argued that the most interesting characters In Shakespeare's plays King Lear, there are many interesting characters however the action in the play is driven by the villainous characters. This is often the case in Shakespeare's plays, but it may be even more so in this play, which contains four villainous characters. There are King Lear's two daughters, Regan and Goneril, who turn on their father as soon as they have enjoyed a taste of his power. There is Regan's husband, Cornwall, who engages in the most physically gruesome act of evil behavior ever exhibited in any Shakespeare's work when he gouges out Gloucester's eyes. Finally, there is Edmund, who is arguably the most interesting character in the entire play and who easily takes on the role of the most villainous character in the play. Goneril is the first of the King Lear's daughters to express to him the depths of her love. She tells him that, "Sir I love you more than word can wield the matter" (1.1.60). However, we soon realize that Goneril is not the loving daughter she presents herself to her father as in the first scene of the play. She tells Regan that something must be done quickly to make sure that their father does not "carry authority with such disposition as he bears" (1.1.351-352) ...read more.

She says, "To willful men the injuries that they themselves procure must be their schoolmasters. Shut up your doors" (2.4.347-349). These are not the actions of a daughter who loves her father, like she pledged not long before. Regan cements herself as a villain in the minds of the reader when she partakes in the blinding of Gloucester. She takes an active part, urging on her husband saying, "One side will mock another. Th' other too" (3.7.86). Regan's villainy also shifts as a result of her l**t for Edmund. Her husband dead, she quickly sets her sights on taking the b*****d as her lover. Both of the evil sisters who were quite capable villains in their own right in the beginning of the play, seem by the end of the play to take a back seat to Edmund, bickering with each other over him. Regan's husband, Cornwall, though a less interesting a character than his wife and sister-in-law, proves himself as a villain in arguably the most memorable scene in the play, the grinding out of Gloucester's eyes. Cornwall is steadfast in his loyalty to his wife and her plans for Lear. His gouging out of Gloucester's eyes makes him an instant villain to remember. ...read more.

Edmund's actions gain him his father's title as Earl of Gloucester but also cost Gloucester his eyes. Later in the play, Edmund further shows us the depths of his evil when he talks about his feelings for Regan and Goneril and how he plans to treat Lear and Cordelia upon their capture. He says, To both theses sisters I have sworn my love...Both? One? Neither? Neither can be enjoyed if both remain alive... As for the mercy which he intends to Leer and to Cordelia, the battle done and they within our power, shall never see his pardon, for my state stands on me to defend, not to debate" (5.1.63-77). Edmund is by far the most intriguing of the villains in the play. Edmund does his best to try and convince us that he only acts to attain what is rightfully his. However, the means he uses to attain those things are downright evil. In conclusion, there are interesting characters in King Lear. There are great heroes such as Edgar, Kent, and Cordelia. However, the average reader comes away more likely remembering the villains than the heroes. Whether it be Regan or Goneril for their betrayal of their father, Cornwall and his brutal blinding of Gloucester, or Edmund and his by any means necessary attitude. In the play King Lear, Shakespeare truly redefines what it means to be a villain in a tragedy. ...read more.

This essay shows the dangers of taking a descriptive and narrative approach. The writer mostly describes the villains, and tells us what they did, illustrating these points with appropriate quotation. This is all done clearly and accurately, but very little argument or analysis is offered. This analysis could be achieved by comparing the villains with the virtuous characters, and attempting an explanation of the appeal of the villains.
And surely an argument needs to be put forward as to why we might find the villains more interesting than Lear?
**