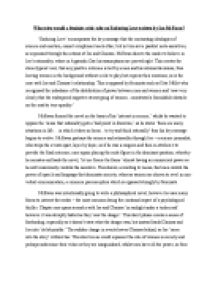 What view would a feminist critic take on &quot;Enduring Love&quot; by Ian McEwan?

﻿What view would a feminist critic take on Enduring Love written by Ian McEwan? ?Enduring Love? encompasses the key message that the contrasting ideologies of science and emotion, cannot compliment each other, but in turn serve parallel meta-narratives, as expressed through the actions of Joe and Clarissa. McEwan directs the reader to believe in Joe?s rationality, where in Appendix One his assumptions are proved right. This creates the stereotypical view, that any positive outcome is led by a man and his rational decisions, thus leaving women in the background without a role to play but express their emotions, as is the case with Joe and Clarissa?s relationship. This is opposed by feminists such as Kate Millet who recognised the imbalance of the distribution of power between men and women and ?saw very clearly that the widespread negative stereotyping of women...constituted a formidable obstacle on the road to true equality.? McEwan formed the novel on the basis of his ?interest in science,? whilst he wanted to oppose the ?sense that rationality gets a 'bad press' in literature,? as he states ?there are many situations in life? in which it does no harm?to try and think rationally? thus his key message begins to evolve. ...read more.

Chapter 13 has evidence of realism, where Jean?s ?hair was greasy and pulled back harshly across her scalp.? This description from Joe?s narrative presents Jean as an ?eternally dissatisfied shrew? another common depiction of women. As readers we notice that Joe is only focusing on Jean?s physical appearance and is perhaps subconsciously implying that women?s appearance to men is far more important than their personality or qualifications in life, hence belittling women and their role in society. The description also makes Joe seem condescending and judgemental in his unemotional conduct towards Jean who is ?grieving?. This now presents Joe in an ill manner and he begins to lose his power on the readers, as they start to view him a different light. Peter Childs also agrees with this as he states ?Joe?s narration does at times imply he has difficulty with empathy and his observations on the emotions of others can seem callous.? Instead Joe ?becomes the surrogate object of her bitterness? as well as the readers due to his detached and rational character. This leads to a role reversal where Jean ? a woman, holds the power and ?was having to lead me by the hand?. ...read more.

The fact that ?Clarissa is unable to bear a child? detracts from her femininity and perhaps reduces her role in the narrative. It could be depicted in a positive light, as she is still able to lead a successful life without bearing children. In contrast, the fact Clarissa is unable to conceive means she cares for her nieces and others even more, showing women are caring and compassionate. In conclusion, Enduring Love provides a narrative under threat from feminist critique. But, by the end of the novel, Clarissa is able to prove she is independent and doesn?t live behind Joe, as she writes a letter in chapter twenty-three from her own perspective. She expresses her thoughts and feelings as she writes to Joe, ?you became more agitated...you were manic.? This initially seems positive; however she is unable to express these thoughts to him verbally, backing up Lacan and Childs who said women used non-verbal communication and that men are the holders of speech. The novel ends with the focus once again on the imbalance of the distribution of power between men and women, concluding that McEwan is seemingly misogynistic through his representation of women in the novel. Word count: 2017 ...read more.