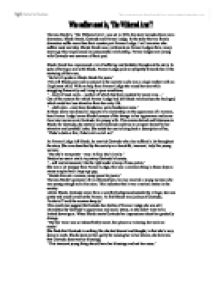 Who suffers most in 'The Withered Arm'?

Thomas Hardy's, 'The Withered Arm', was set in 1812; the story includes three main characters, Rhoda Brook, Gertrude and Farmer Lodge. In the story the two female characters suffer more then their counter part Farmer Lodge. I will examine who suffers most and why. Rhoda Brook was a milkmaid on Farmer Lodges farm, many years ago they experienced an unsuccessful relationship, Farmer lodges new young wife Gertrude was unaware of their past. Rhoda Brook has experienced a lot of suffering and hardship throughout the story. In spite of having a son with Rhoda, Farmer Lodge paid no sympathy towards her or the nurturing of their son, 'He ha'n't spoke to Rhoda Brook for years.' This left Rhoda poor and an outcast in the society as she was a single mother with an illegitimate child. With no help from Farmer Lodge she raised her son while struggling financially and living in poor conditions, '...built of mud-walls... ...read more.

At first Rhoda was jealous of Gertrude, 'Is she tall? said the women sharply.' This could also suggest that besides her dislike of Farmer Lodge she was still intimidated by Gertrude's appearance and social status, as she didn't want to be looked down upon. When Rhoda meets Gertrude her impressions about her gradually change, 'But her voice was so indescribably sweet, her glance so winning, her smile so tender' She finds that Gertrude is nothing like she had dreamt and thought; in fact she's very down to earth. Rhoda starts to feel guilty for cursing her in her dream; she believes that Gertrude deserves her blessings, 'This innocent young thing should have her blessings and not her curse.' It is obvious that both Rhoda and Gertrude have suffered throughout the story but the question is who suffered most? Rhoda suffers emotionally and financially due to Farmer Lodge and Gertrude. She suffers financially because she has to raise her son on her own with very little money and little amenities and emotionally because ...read more.

The blemish on her arm gives her physical pain; she also cannot bear to look at it, 'It pains me dreadfully sometimes.' Eventually Gertrude becomes restless to find a cure for her deformed arm; her suffering factor keeps multiplying as she has to touch a dead corpse and especially it being Rhoda's son. Now she has to live with guilt as she lets an innocent person die, 'Someone innocent die' She suffers emotionally here, partly because the corpse is someone she knows and cared for but mostly because it is a dead corpse and in those days young women were not supposed to look at such things. Gertrude had the last of her suffering at the end of the story. While suffering in the thought of not being able to pursue Farmer Lodge's love again, she was once again cursed by Rhoda and died a painful death. Overall I feel that Rhoda suffered most in the story as Gertrude's suffering ended with her death however Rhoda continued to suffer emotionally and financially. She became lonelier than before with only memories to cherish of her son. ...read more.